Wayne Rooney insists Derby are not yet daring to dream of a great escape, despite recording a third straight Championship win with a 2-1 success at Stoke.

Goals from Luke Plange and substitute Colin Kazim-Richards earned County a victory which took them to within 11 points from safety.

‘We have always believed there is a possibility we can stay in this division,’ Rooney said.

‘But we know it is a small chance and we are not getting carried away. However, full praise must go to the players because their commitment this season has been incredible.

‘These three wins now are at the back of our minds and we must give our full attention to Reading on Monday because that is an important game.’

Derby, battling back from a 21-point deduction for going into administration, are now just four points behind second-bottom Barnsley after a seventh league win of the season.

Rooney admitted it had been hard to leave out Kazim-Richards after the striker’s winner against West Brom three days earlier, but his decision was vindicated by 19-year-old Plange’s second senior goal in three games. 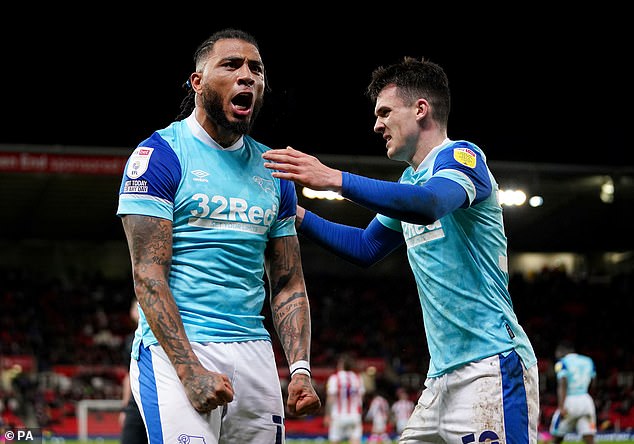 ‘It is always difficult naming a team when there are players like Colin who scored in his previous game,’ said Rooney.

‘But I had to go with my instinct and what I believed was right for this game.

‘Plange causes defences trouble with his movement in behind. That is a real strength of his, plus he is a composed finisher.’

Asked about any impending takeover of the club, Rooney added: ‘Hopefully I can have a conversation with the administrators tomorrow and I have more news before the game on Monday.’

Plange opened the scoring after 16 minutes, but former Derby favourite Tom Ince looked to have earned Stoke a point when he levelled with 12 minutes to go.

But home celebrations were cut short when Ravel Morrison picked out Kazim-Richards, who kept his cool to fire home a late winner. 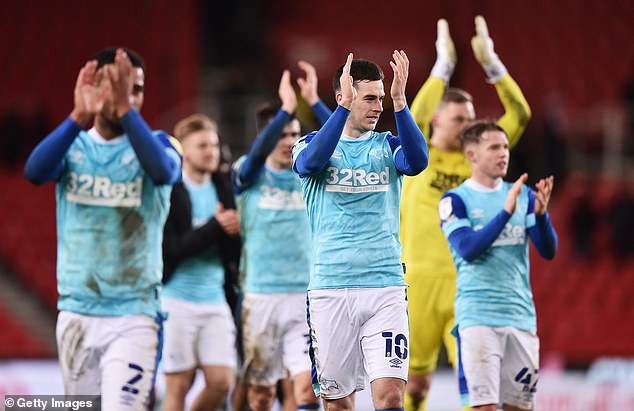 Stoke, with only one win in five games, remain four points off the play-offs, albeit with two games in hand.

Manager Michael O’Neill said: ‘We could not get any consistency in our play throughout the game.

‘Our attitude to the game was good, but we lacked quality in our play. We pressed hard, but when we won the ball we turned it over again.

‘There were too many stray passes and unforced errors. We were poor in possession and that was the biggest factor.

‘We didn’t get any rhythm which gives the opposition hope and confidence. We forced the game more in the second half and got the equaliser. You feel then you are capable of going on to win the game.

‘But we gave away a bad goal again, losing the ball in a bad area and how we defended after that was also poor. And that was the deciding factor in the game.’