Trent Alexander-Arnold showed his class for Liverpool with a sensational free-kick along with a solid defensive display, but Rio Ferdinand noticed he still didn’t escape the wrath of Jordan Henderson in the first half. Liverpool were in need of a solid performance following a dissappointing result against Brighton at the weekend.

Heading into the match against Rangers, Liverpool had been guilty of conceding the first goal in six games already this season. Alexander-Arnold has taken on heavy criticism and was at fault for Brighton’s first two goals at the weekend.

The full-back answered some of those critics with his third goal of the season and was named man of the match against Rangers. He was given a standing ovation by members of the Kop after being subbed off late in the game.

But Ferdinand was watching closely from the sidelines throughout the match and saw Liverpool captain Henderson appeared to be furious at Alexander-Arnold at one stage. The incident supposedly happened in the first half, and Ferdinand wanted to know after the game why Henderson was shouting at his compatriot. 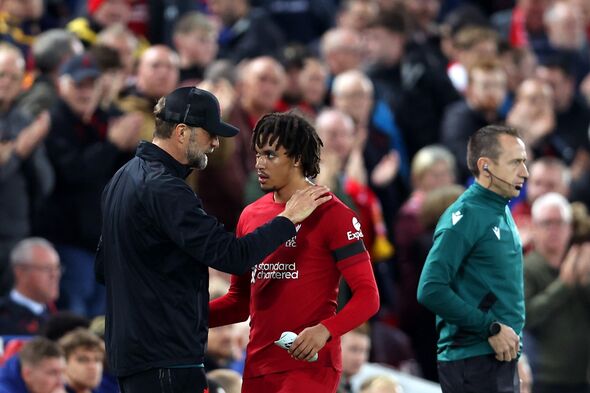 “I asked him before he came on air,” Ferdinand said on BT Sport. “He was shouting at Trent early in the first half and [I asked] what was it about.

“He said, ‘nah, I just wanted him to keep the ball, he’d gave the ball away’. It’s those little things and he mentioned about taking it personal and players being understanding that being spoken to aggressively on the pitch doesn’t mean I don’t like you, or you say, ‘oh I’m not gonna be your mate anymore’.

“No, on the pitch during that 90 minutes, what’s said on the pitch stays on the pitch because we want to be better as a team and I want to help you and don’t take things personal and as a team you need that.”

Henderson has been Liverpool’s captain since 2015 now and has grown into his role at the Merseyside club. And he’s given an insight into how he’s tried to guide Alexander-Arnold into ignoring the recent criticisms.

“You’ve got to give Trent a license to get forward and produce what he can produce up the pitch,” Henderson said. “I thought he was good defensively tonight, he did the basics really well. I didn’t have to cover too much.

“It can be difficult. You try to not listen to social media especially when you go through a tough period as an individual or a team. You’ve got to switch off the noise and focus on what you do day-to-day and stay focused on what we’re trying to achieve as a team.

“That’s not easy. It can hurt players at times but you’ve got to try and find a way to use it as fuel and energy on the pitch.”