Manchester City winger Riyad Mahrez could leave the Etihad in the summer transfer window. PSG have already expressed an interest in the player and Real Madrid are now also eyeing up a move at the end of the season, according to reports in Spain.

City boss Pep Guardiola knows there may be an exodus of players from his squad in the summer, because of the club’s Champions League ban.

And while City have appealed against UEFA’s two-year European club competition ban for violating Financial Fair Play regulations, some players are already considering their future at the club, with Mahrez being one of them.

According to Spanish publication Don Balon, Mahrez is wanted by both PSG and Real Madrid.

Mahrez joined City to win the Champions League and whilst he has added another Premier League title, as well as three domestic cups, to his trophy cabinet, Europe’s elite competition has remained elusive.

The report claims the 29-year-old is not willing to wait another two years before trying to win the competition and as a result is exploring his options as long as the UEFA ban is in place.

Mahrez is having a good season for City and has scored nine goals and provided 14 assists in 37 appearances in all competitions.

However, City are not willing to sell the Algeria international, who is under contract until 2023, cheaply.

City spent £61million to sign Mahrez from Leicester City in 2018 and the report claims that are not willing to accept anything less than £80m for the winger.

Los Blancos boss Zinedine Zidane wants to add to his attacking options in the summer as Barcelona, who are currently top of La Liga, have scored 14 more goals than Real’s tally of 49 so far this season.

Meanwhile, PSG are looking for potential replacements for Neymar, who is looking at securing a return to Barcelona.

Mahrez already has experience of playing in France, with the winger having spent four seasons with Le Havre before joining Leicester in 2014.

The winger’s exit could also work out well for Guardiola. 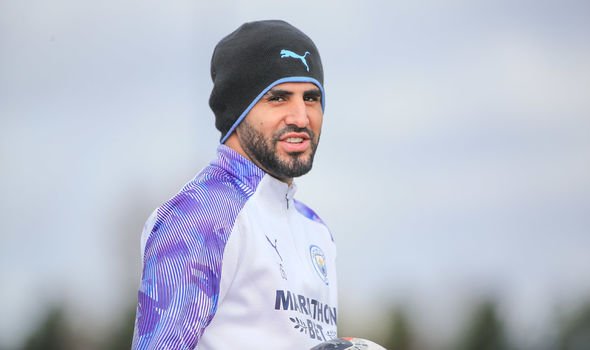 The funds from the potential transfer would not only allow the Spaniard to strengthen his squad in the summer but it would also remove a high salary from the club’s wage bill.

Another player who could also leave City in the summer is Leroy Sane.

The 24-year-old has been sidelined for the entire season after he suffered a serious knee ligament injury in the Community Shield win over Liverpool in August.

Bayern Munich delayed making a move for the youngster after he suffered the serious injury, but the Bundesliga champions are expected to return in the summer to make another move for the winger.