Manchester United striker Marcus Rashford has revealed that his charity work has raised £20million for vulnerable children in Manchester.

Rashford teamed up with the charity FareShare to help distribute food for children who would otherwise have gone without meals due to schools being closed as a result of the coronavirus pandemic.

Although Rashford admits that the initiative was ‘a slow process’ initially, companies such as Tesco, Co-op and Asda helped immensely.

Speaking on the Official Manchester United Podcast, Rashford said: ‘It’s done a lot better than what we thought and what it actually started off with.

‘It was a slow process at first and we just set it at trying to get to £100,000 and a couple of days passed and we were way past that and then a week passed and the numbers just kept getting higher and higher.

‘It got to a stage where we actually had a lot of donations, more than we expected, and we were struggling to actually deliver the food to people, so that’s where the bigger companies like Tesco, Co-op, Asda, they’ve come in and helped us massively with deliveries on that side of things and also put in their own large donations as well.

‘I think it’s just around £20million now. It’s a big number. At first the donations were going kind of slow.’ 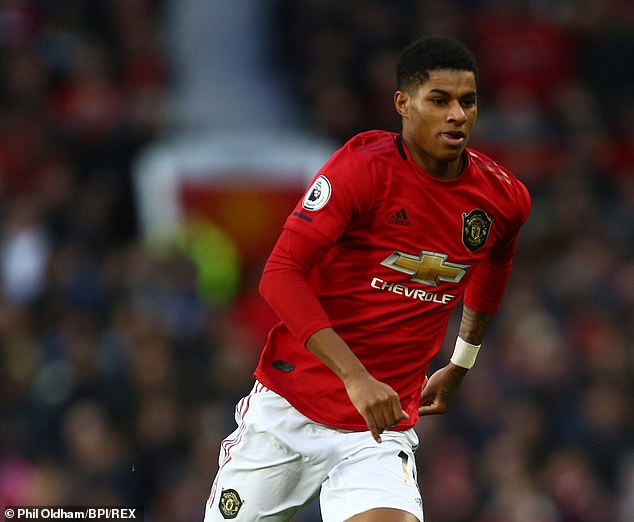 Rashford teamed up with the charity FareShare, with Tesco, Asda and the Co-op contributing

Rashford revealed that he put money into the initiative himself before the aforementioned companies stepped in.

Pret A Manger and Pizza Express also contributed, with members of the public also getting involved.

The England international admits that he would have been affected by the situation regarding school meals had the coronavirus pandemic occurred when he was younger.

‘Just two or three days ago it reached £20million.

‘We don’t know how long this is going to go on for, and it’s just something that, if this had happened ten or 15 years ago, it definitely would have affected myself in the position I was in when I was a kid, so it was just something that I thought if there’s a way to try and help people and kids especially then let’s just try and do it.’