Nicola Docherty is living the dream. Having first kicked a ball at the age of six, the Rangers Women defender has finally won the league with the club she has supported since childhood.

As if that wasn’t enough, she will be in Seville on Wednesday evening, cheering on her male counterparts as they look to make their own piece of history in the Europa League final. Heady days, indeed.

A goalless draw with Glasgow City just under two weeks ago secured Rangers the SWPL1 title, with a game to spare, finally breaking their rivals’ grip on the women’s game in Scotland.

‘I couldn’t believe we’d actually done it,’ Docherty admitted. ‘I remember shaking hands with the Glasgow City players first of all, as it’s a club I played for. Then, after that, I took myself away from my team-mates because I felt so overwhelmed.’

That Rangers deserve their title is undisputed. They finished the league season undefeated, having beaten Celtic 3-1 in the final match of their campaign. It’s an astonishing run which brought to an end Glasgow City’s 14-year dominance of the Scottish top flight.

‘I do feel it was our time,’ said Docherty, 29. ‘Last season, we struggled with strength and depth in our squad. We managed to get big results in games against Glasgow City and Celtic, which we struggled to do last season, so it felt like it was coming.

‘We knew going into the City match that we just needed a point to seal the title, but we weren’t playing for a draw. We wanted to win more than anything.

‘The draw against City in the penultimate match of the season gave us the title and that’s all that mattered.’

Docherty, who played a huge part in City’s fortunes for many years, insists there was no added sense of satisfaction that the league was won while playing against her former side. She is just delighted to be working with a team she has supported her entire life and whose progression since going fully professional has been significant.

‘I had eight great years at Glasgow City,’ said Docherty, ‘but doing it for a club I’ve supported my whole life was the ultimate satisfaction. It really was a dream come true for me and my family.’ 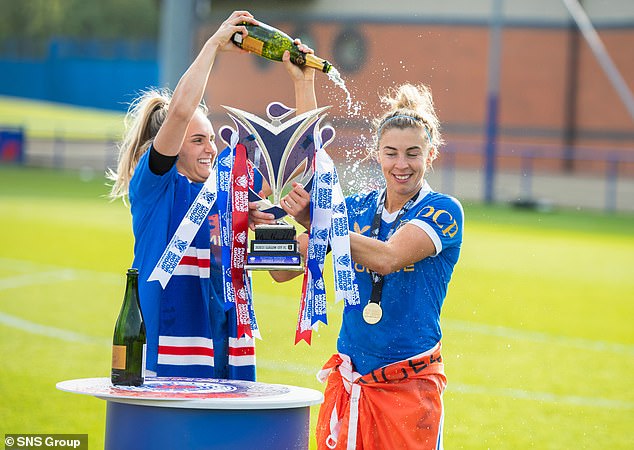 Winning the title in front of her father, Nicky, was all the more special as a result of him suffering a period of illness. ‘My dad has been unwell for a long time,’ she said. ‘He was in hospital for four or five months and on constant oxygen.

‘When he eventually came home, that oxygen feed continued and he couldn’t get to games. He didn’t want to be seen at games like that, but he eventually got to see me playing at Ibrox in the match against Aberdeen and winning the title against City. He was, like me, overwhelmed.

‘It was the first time he’d seen me playing and at Ibrox, too. The security guard wheeled him down and both of us started crying.

‘He was so proud. My mum and dad have been driving me around the country for football since I was a little kid, so it was an incredible feeling.’

Playing at Ibrox was also a moment to cherish for Docherty, who had only experienced the pitch there on one previous occasion.

‘I’d played there before when I first played for Rangers in 2011, but this was the first-ever professional women’s team to play at the ground. There’s a real backing from the club now and they really do have a one-club mentality. Being a part of that experience was phenomenal and the fans were amazing.

‘We won 4-0 and I scored one of the goals, too. I never dreamed I would play and score at Ibrox! I remember when I was a little kid and said I wanted to play for Rangers. I didn’t think that would ever be possible.

‘My generation didn’t really have many opportunities, but now there are so many. It really is fantastic. I always say to youngsters: “Go chase your dreams”. Look at me, I did that and I managed to achieve it.’ 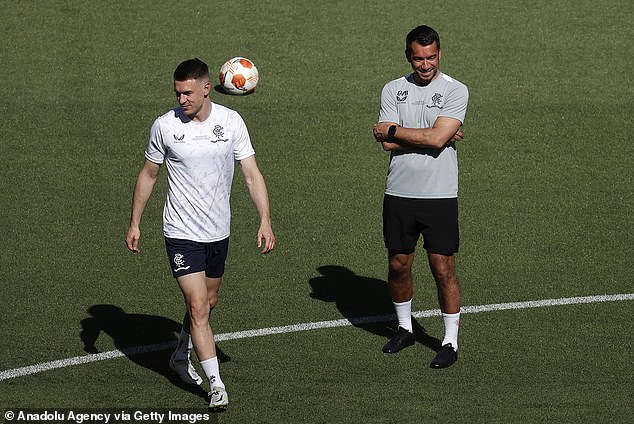 Being a part of the ‘Rangers family’ has been instrumental in Docherty’s life thus far. Growing up in Falkirk, she regularly travelled to Ibrox with her dad, who instilled in her a love of the beautiful game.

Michael Mols was her hero, and she beams with pride as she remembers the ‘Dutch Masterclass’.

‘He had unbelievable feet,’ she said. ‘Now, I’m a big fan of John Lundstram. He’s incredible, too. Just different class.

‘As a kid, I was always wearing Rangers tops and going to games with my dad and it was from there I became a fan. I remember going to games and, at half-time, I would get my pie, crisps, Mars bar and a coke. They were good times.’

Though the pies and crisps may be gone these days, her excitement at watching her team has not. Docherty has joined team-mates Kirsty Howat and Sam Kerr for a veritable ‘planes, trains and automobiles’ trip to Seville as they prepare to watch the men in the Europa League final.

‘We’re driving to Cardiff, getting a flight to Alicante, staying in Torremolinos, then getting a supporters’ bus to the game,’ she said. ‘I think they can go and win it. They’ve shown themselves to be strong against Dortmund and FC Braga, so, for me, why can’t they? I’m so excited to go. I feel extremely lucky.

‘I’d honestly start crying if they won it. It would just be incredible. Being a fan and with everything the club has been through in recent years, it would be an amazing feat.’ 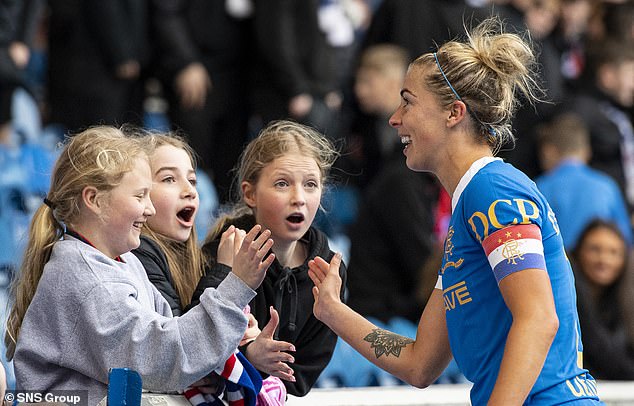 It has been an emotional journey for the Rangers player, who must now prepare for her own European adventure.

The women’s side will play Champions League football next season for the first time. It’s a challenge Docherty has faced before with Glasgow City, but one she’s now striving to excel in with Malky Thomson’s side.

‘I remember my first time walking out to the Champions League anthem and you just know it’s a completely different ball-game. It’s a lot more physical and intense and there’s a real Champions League feel about it.

‘I’m really looking forward to doing it again with a great bunch of girls. When you’re at Rangers, there’s always pressure and, now we’ve won the title, we know we have Champions League football to contend with. We want to do even better in that and really compete.

‘As soon as we got it, I said to Malky: “It’s amazing, but I want us to be challenging in it”.

‘I’ve done it with City and have done well, but I want to do it at Rangers. I don’t know what the staff have got in mind, but we’ve got to compete in the Champions League and set high standards.’

Next season, the women’s game in Scotland will change further, as SWPL1 and SWPL2 come under the governance of the SPFL. 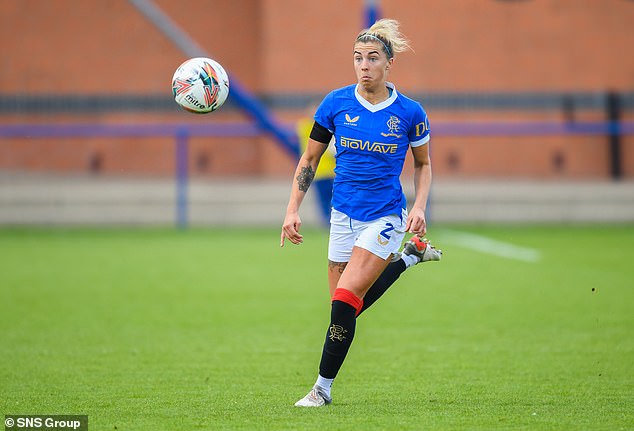 After winning the league, she is now preparing for her own European adventure next season

While there may be some doubt about what happens next, the women’s game is growing. Of that there is little doubt.

‘I’ve had the odd negative thing said to me on social media,’ said Docherty. ‘Things about staying in the kitchen and that nonsense, but I don’t really care.

‘As soon as I see anything negative, I tend to block them. I have a fair block list. It annoys me, though, that others may get affected by that.

‘There were probably still people saying Barcelona women shouldn’t be playing despite the incredible numbers they’re attracting. I’m not sure how you stamp that out. It happens everywhere, not just in football.

‘But what’s happening now in the women’s game, in terms of numbers, is just incredible. It’s amazing to see also how the game in Scotland has grown and where it’s going.

‘The more that clubs invest in their women’s teams, the more talent they will produce. The young talent coming through now is unbelievable.

‘We need to thank the likes of Gemma Fay, Julie Fleeting and Rose Reilly for what they did before us. They’re the players who started the journey for every single one of us.’