Rangers boss Steven Gerrard has joked Diego Maradona is after his job after receiving a direct message from the Argentina great earlier this week. Gerrard named Maradona as one of the six players that made him fall in love with football on his Instagram account. And after tagging Maradona in the post on his story, the 59-year-old replied.

Speaking on Sky Sports’ The Football Show on Thursday, Gerrard said: “I was really happy with the six I picked.

“I actually had a message yesterday and nearly passed out.

“Diego Maradona, private message on Instagram, so I was absolutely delighted to get a reply off him, yeah.”

Liverpool legend Jamie Carragher replied to Gerrard, asking: “Was he after a [job] at Rangers?”

JUST IN: Newcastle United boss Steve Bruce warned he could be sacked after takeover

To which Gerrard jokingly responded: “He was probably after my job, yeah.”

Maradona is currently the manager of Argentine side Gimnasia.

“I think this challenge needed to be stretched to 10, six wasn’t enough,” Gerrard continued.

“From an international point of view it was always Lineker who scored all the goals and made you jump off the couch.

“Obviously Gazza, probably the best English footballer of all time.

“Obviously my two Liverpool ones were Rush and Barnes but I would have liked to have also had Robbie Fowler in there and Jamie [Redknapp] himself from my younger days, who looked after me when I was an apprentice. 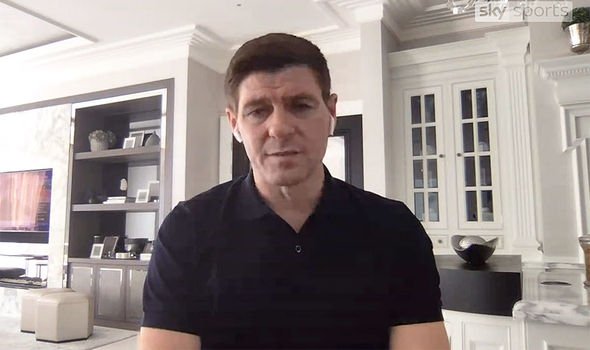 Meanwhile, Gerrard has criticised the SPFL for the current situation in Scottish football.

“Well I’ve been obviously watching closely from back home and it does seem a bit of a mess at the moment,” Gerrard said.

“I think Rangers’ stance on it, and certainly my stance, is I let the suits carry on doing what they’re doing.

“I think that’s their job to continue to represent Rangers that way.

“But from afar the SPFL looks an absolute mess in all honesty.

“From my point of view, I think all I ask is for the main leader of the SPFL to show some real leadership in this time.”