Two English Premier League clubs will play the Brisbane Roar – and each other – during an off-season tour to Queensland in July.

The tournament will kick off in Townsville’s new Queensland Country Bank Stadium on July 11, when the Roar takes on Crystal Palace. 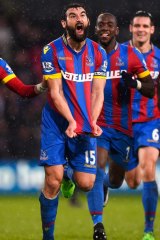 Former Liverpool FC striker Fowler said his team would be "up against it" playing Premier League teams.

"We can go out there and try and give it as good as we have got. I think if we go there with a defeatist attitude, then I don't think you should be playing football," he said.

Crystal Palace chairman Steve Parish said it was the first time the team had played in Australia.

“The tour comes at a crucial stage of our preseason so the fitness program and the games are important, but we look forward to spending time exploring stunning Queensland and meeting as many people as we can,” he said.

Tourism Minister Kate Jones said Queensland was the place to be for football fans in 2020.

“You don’t get EPL stars come out to Australia every day,” she said.

“The English Premier League is the best soccer league on the planet.

“The fact we have secured two current EPL sides to come here is a testament to the fact that Queensland is a world-class events destination.”

It will not be West Ham United’s first visit to Suncorp Stadium. The side lost 4-0 to the Olyroos in May 1995, with future Roar player Danny Tiatto among the scorers for the Australians.

“I’ve had the pleasure of going to Brisbane before and it was a fantastic place with warm and friendly people," West Ham manager David Moyes said.

"I’m very much looking forward to going back with West Ham United for what will be an important part of our preparations for the 2020-21 season.”

The two London clubs have links to Australia, with Mile Jedinak and Tony Popovic having played for Palace, and Stan Lazaridis, Robbie Slater, Richard Garcia, Lucas Neill and Dylan Tombides pulling on the claret and blue of West Ham.