Ellie Carpenter already has one UEFA Women’s Champions League winner’s medal – but, to put it bluntly, she shouldn’t really have it. It’s a quirk of history. A participation award, but even that is overstating it. It’s partly why this weekend matters so much.

Two months after Carpenter joined Olympique Lyonnais, in mid-2020, she found herself on the bench for the 2019-20 Champions League final. Because of the pandemic, it happened three months after it was originally scheduled, but after the transfer window that enabled the 22-year-old to sign for them as a replacement for outgoing England star Lucy Bronze.

So Carpenter had to settle for being an unused substitute as Lyon (and Bronze) toppled Wolfsburg 3-1. It was no less amazing an experience for the dashing Matildas defender in her first taste of European club football, and just being on the team sheet made her the first Australian to have won a major European final since Harry Kewell with Liverpool in 2005. But the celebrations were hollow.

“I wasn’t really meant to be there, but I was, which was a great bonus. It was quite amazing, but it didn’t really feel like … I obviously didn’t play, so I didn’t feel like I had won it, you know what I mean?” Carpenter said.

“But it’s so great to be part of the team and to know what it takes to get there, and now doing a whole season, starting from the first games in the group stage, the qualification rounds and everything – now it feels a lot different, because you’ve worked the whole way from the beginning.”

Two years on, now Carpenter really knows what it’s like to be a player for Olympique Lyonnais – one of the most dominant teams in sports history, and the benchmark-setter in women’s football long before it was popular or trendy for traditionally male-focused clubs to care. And so Sunday morning’s final (AEST) against Barcelona at the Juventus Stadium in Turin, Italy, is more meaningful, more real.

Carpenter shares a dressing room with some of the world’s best players, including Norwegian superstar Ada Hegerberg, emerging American sensation Catarina Macario, Chilean goalkeeper Christiane Endler, and the backbone of the French national team that sits No.3 in FIFA’s world rankings. She has started almost every game she’s been available for, and can feel herself getting better almost every day.

“I don’t think people understand actually how high-pressure it is, and how cut-throat the environment is,” Carpenter said. 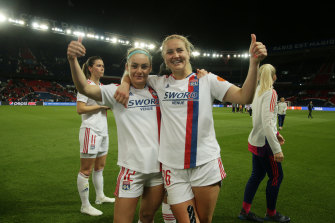 This season, Lyon are undefeated in the French Division 1, and are two wins away from sealing top spot and gaining revenge on PSG.

Winning is the expectation, and Carpenter has become somewhat accustomed to that, which will hopefully come in handy next year at the Women’s World Cup when all of Australia is watching the Matildas.

“I’m more experienced, playing more high-pressure games week-in, week-out, with the league and Champions League,” she said. “I’m exposed to that more regularly than I was before. Come the World Cup, it’s [going to be] kind of like a normal game … it’ll be easy for me, I guess. And so many other players are playing at world-class clubs around the world and that helps us as well.”

For now, though, the focus is Barcelona, who trounced Sam Kerr’s Chelsea 4-0 in last year’s Champions League final, but lost 4-1 when they met Lyon in the decider three seasons ago. Most of the Spanish national team play for Barca, including captain and Ballon d’Or winner Alexia Putellas, but they are best known for the incredible crowds they pulled earlier in the tournament: the home legs of their quarter and semi-finals attracted 91,553 and 91,648 people to the Camp Nou, breaking their own world record for a women’s football match and making headlines around the world.

“It brings the level up, it’s more competitive. It’s so good for the game. Obviously Barcelona are a great team, a world-class team … these are the games you want to play in, probably one of the biggest games of my career.

“I’ve always wanted to play in the Champions League, it’s one of the best competitions there is – the best against the best in Europe. You can’t get much better than that. Saying you’re the best club in Europe after you win, it’s quite a nice title to have. Hopefully I can win it two times.”