Christian Pulisic has dismissed speculation he could leave Chelsea this summer and insists he is relishing the intense competition at Stamford Bridge under Thomas Tuchel.

USA international Pulisic has scored 17 goals in 83 appearances for Chelsea since joining the club from Borussia Dortmund in 2019.

The 22-year-old enjoyed a superb second-half to the 2019-20 campaign but has found regular game-time harder to come by this season, starting less than half of Chelsea’s Premier League matches.

Pulisic’s current role at Chelsea has led to speculation he could look to leave west London this summer and he admitted he was ‘very frustrated’ to be benched for the Champions League semi-final victory over Real Madrid.

But Pulisic insists he is ‘happy’ at Chelsea and willing to fight for his place in the team.

Asked whether he sees his long-term future at Stamford Bridge, Pulisic told ESPN FC: ‘Yeah, I’m obviously happy here. It has been an incredible two years.

‘I’m always up for a challenge, I love competing, I love the position I’m in and I’m enjoying my time here.’

The Blues face Leicester City in the FA Cup final on Saturday – just three days after they suffered a disappointing defeat to Arsenal – and meet Premier League champions Manchester City in the Champions League final on May 29.

Pulisic is wary of the threat of Brendan Rodgers’ Leicester and hopes the recent loss to Arsenal makes his teammates ‘that much more hungrier’ at Wembley. 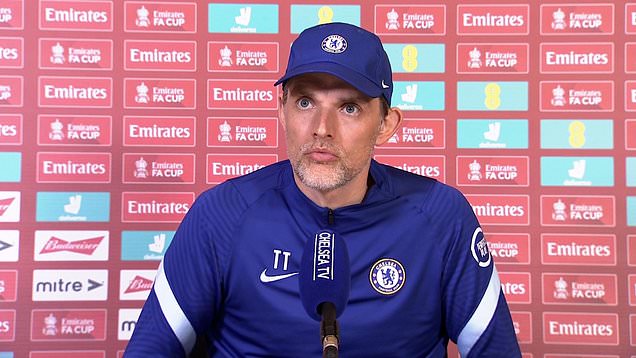 ‘Maybe it is something that we need – we are that much hungrier, that much more looking forward to the game tomorrow,’ he said.

‘We know what Leicester is all about. They are going to battle, they are a tough team. They’ve done extremely well in the league this year.

‘We know about their attacking ability and some of the players they have. So we expect them to come and battle.

‘We are going to give it everything, and hopefully if we play the way we do and we match their intensity, I think we can beat them.’