Players and fans remain divided on taking the knee as the anti-racism gesture sparked a mixed reception at the start of the season.

The Football League kicked off with the pre-match ritual performed in front of capacity crowds for the first time since the first lockdown last March.

Just over half of the games in the Championship, League One and League Two saw both teams take the knee with the gesture greeted at grounds with a smattering of boos before being drowned out with widespread applause.

It was a similar situation at Wembley, where all players of Manchester City and Leicester took the knee ahead of the Community Shield and huge applause drowned out the boos.

Ten games across the Football League saw neither side take the knee while the others saw a mix of some players doing so and others remaining stood. Doncaster’s players stood on the centre circle and linked arms.

Premier League clubs have announced that they will continue to take the knee this season. Their resolve to do so has grown since Euro 2020, after which England’s Marcus Rashford, Jadon Sancho and Bukayo Saka were racially abused following their missed penalties in the final defeat by Italy. 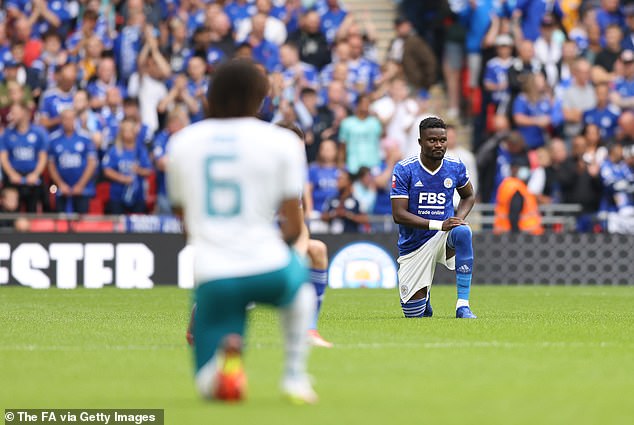 Even promoted side Brentford, who had stopped performing the gesture in February, announced they have reversed their decision and will kneel in solidarity with the other Premier League clubs. Striker Ivan Toney, however, will remain standing.

Lincoln City captain Liam Bridcutt was the only player not to take the knee in his side’s game at Gillingham. Lincoln had announced in November they would stop initiating taking the knee but have now also reversed their decision.

‘We had a discussion amongst the lads,’ said Bridcutt. ‘They will be taking a knee, they want to support the cause.

‘I think there’s more to be done. It’s almost become a token gesture, a brand, it’s kind of lost its meaning and purpose.’