Phil Foden will ‘shine’ at the World Cup if given the chance to do so, says England and Manchester City team-mate Kalvin Phillips

Phil Foden will ‘shine’ at the World Cup if given the chance to do so, according to England and Manchester City team-mate Kalvin Phillips.

There was widespread clamour for Foden to be introduced off the bench as England were held to a drab 0-0 draw in Friday’s Group B meeting with the United States.

Manager Gareth Southgate was criticised for not utilising the 22-year-old as his side struggled to create chances at the Al Bayt Stadium.

Victory over the USA would have sent England through into the round of 16 but they could not find a breakthrough, only intensifying the calls for Foden to start Tuesday’s clash against Wales.

Phillips, who has yet to feature in Qatar having recently recovered from shoulder surgery, believes Foden would grab his opportunity with both hands were he to force his way into Southgate’s XI.

‘I think, when he is given the chance, he will shine and he is just waiting for that chance,’ he said.

‘He knows it is going to be difficult, obviously, to get into the team after we’ve played so well so he is just waiting for the right moment and once that comes I think he will kick on and start flying.’ 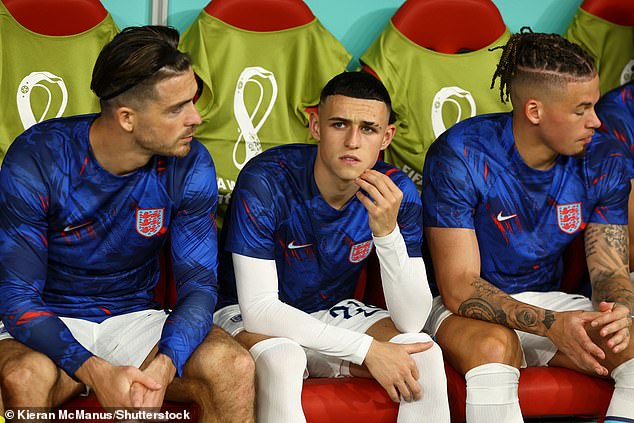 Southgate has opted for a 4-3-3 system in both the draw against the United States and the opening 6-2 win over Iran, a game in which Foden did come on as a second-half substitute on the right side of attack.

Phillips, though, feels Foden would do his best work more centrally, telling ITV Sport: ‘I think Phil can offer a lot of things.

‘I think for me his best role is probably as a number 10 – I think in that role where he can float about, get on the ball and do whatever he wants to do.

‘You see him when he takes it past people, you’ve seen the assists and the goals that he’s got this year, he’s a real threat.’