Florentino Perez has revealed he spent an afternoon trying to convince Zinedine Zidane to stay at Real Madrid and believes the Frenchman did not write his savage farewell letter criticising the club.

Zidane, who is regarded as one of Real’s greatest managers of all-time, departed the LaLiga giants for a second time this summer after a trophyless season last term.

The French coach wrote an honest open letter which hit out at Perez’s club for a lack of support, but the Real president believes Zidane departed due to the pressure fro the Spanish media. 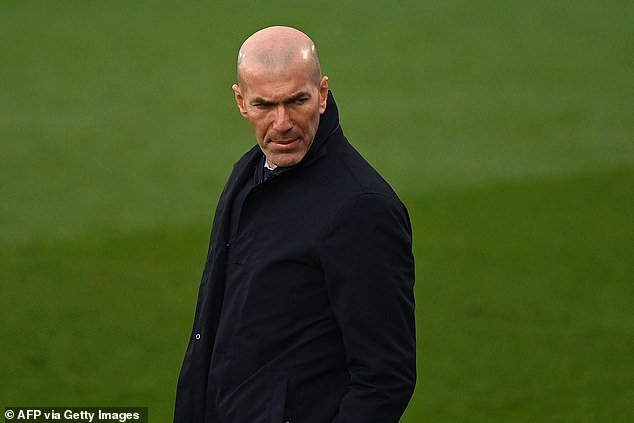 The French boss quit the LaLiga giants this year, citing a lack of support from the club board

When asked if he expected Zidane’s departure, Perez told Onda Cero’s El Transistor’s programme: ‘No, I know him. I expected it after that tough season.

‘Think about it, if you had to do 4 press conferences a week with some of the questions that get asked. It’s tiring.

‘If you ask Zidane the same thing 8 times in each press conference for a whole year, of course he gets tired.’ 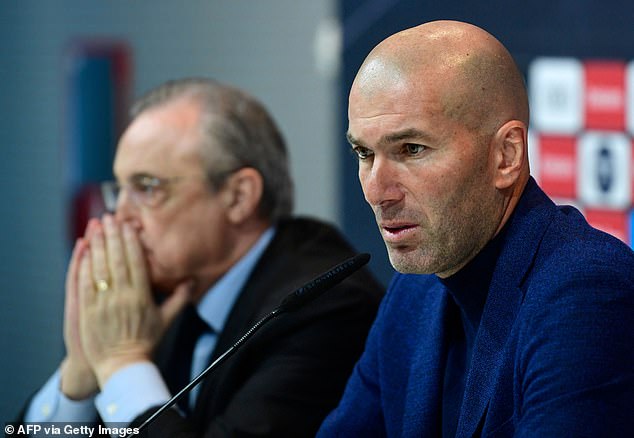 Zidane first became Real manager at the start of 2016 following Rafa Benitez’s exit from the club.

The Frenchman immediately wrote himself into Los Blancos folklore by winning three straight Champions League titles in a row, becoming the first club ever to retain the European title.

Zidane quit Real in 2018 but was reinstalled as head coach in March 2019 and won the Spanish league and cup double in 2020.

The 49-year-old wrote an open letter to Real Madrid fans criticising the club hierarchy for their running of the club and explaining why he was quitting the LaLiga giants. 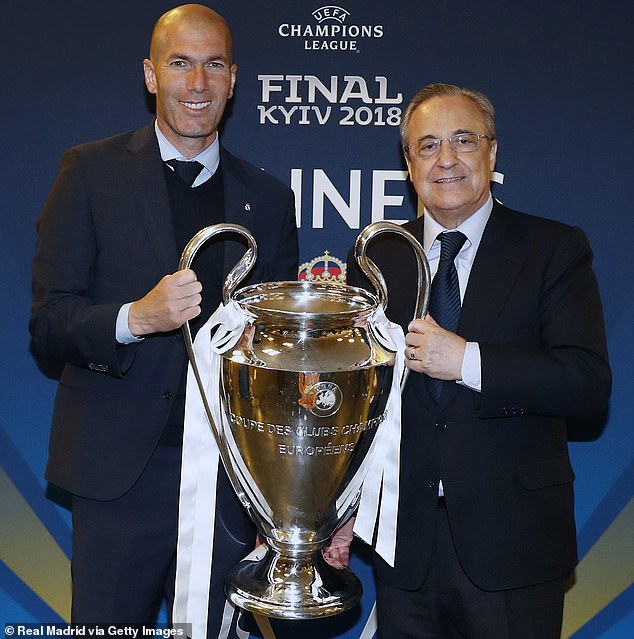 ‘I’m leaving but I’m not abandoning the ship and I’m not tired of coaching,’ he wrote.

‘In May 2018 I left because after two and a half years of so many victories and trophies I felt the team needed a new plan to stay at the highest level. Today things are different.

‘I’m leaving because I feel that the club didn’t give me the support I needed, it didn’t offer me the support the construct a project for the medium or long term.’ 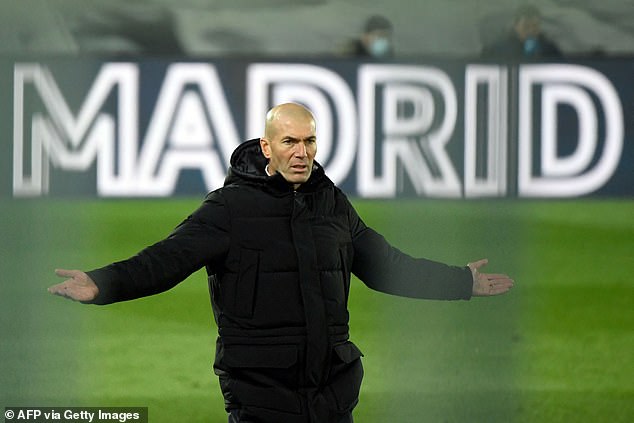 Perez has replaced Zidane with another former Los Blancos coach in Carlo Ancelotti, but the 74-year-old president believes Zidane was not the one who wrote that open letter to the club’s supporters.

He claimed: ‘I don’t think he has any issue with me. I did not read the letter. I don’t think it was written by him, someone wrote it for him.’

‘Zidane has the dream of one day becoming the manager of France. I still love Zidane. If he wants to return, this is still his home.’

For the last 20 years, ever since the first day I stepped my foot down in the city of Madrid and put on the white shirt I’ve felt your affection. I’ve always felt there was something very special between us. I’ve had the great honour of being a player and coach of the most important club of all-time, but first of all I’m a Madridista like the rest of you. That’s why I wanted to write this letter to you to say goodbye to you all and explain my decision to step down as coach.

When in March 2019 I accepted the offer to return to Real Madrid after eight months of rest it was because Florentino Perez asked me to, of course, but it was also because you fans asked me to do so every day. Whenever I ran into a Real Madrid fan on the street I felt the support and desire to see me with the team again. Because I share the values of Madridismo, this club owned by its members, its fans, by everyone. I’ve tried to transmit this values in everything I’ve done, I’ve always tried to be an example.

Spending 20 years at Real Madrid is the most beautiful thing that has happened in my life and I owe everything exclusively to Florentino Perez, who bet on me in 2001, who fought for me, to make me come to the club when certain people were against it. I say this from the bottom of my hear, I’ll always be grateful to the president for that. Always.

Now I’ve decided to leave and I wanted to explain to you well my reasons.

I’m leaving but I’m not abandoning the ship and I’m not tired of coaching.

In May 2018 I left because after two and a half years of so many victories and trophies I felt the team needed a new plan to stay at the highest level. Today things are different.

I’m leaving because I feel that the club didn’t give me the support I needed, it didn’t offer me the support the construct a project for the medium or long term.

I understand football and know the demands of a club like Real Madrid, I know that when you don’t win things you have to leave. But here they have forgotten something very important, they have forgotten everything we built each day, everything I contributed to the relationship with the players, with the 150 people who work with and around the team.

I’m a natural winner and I was here to win trophies but beyond that you have human beings, emotions and life and I got the impression that these things were not being appreciated, and people forgot that’s how you maintain the dynamic of a great club. I even felt in a certain way that I was being reproached.

I want people to respect what everyone together achieved. I would have liked my relationship with the club and the president in the last few months to have been a little different to that of other coaches. I didn’t ask for privileges, of course not, just for people to have better memories.

These days, the lifespan of a coach at a big club is around two years, not much more. To last longer human relations are essential, they are more important than money, more important than reputation, more important than anything. You have to look after them. That’s why it hurt so much when I read in the press, after one defeat, that I was going to be sacked if I didn’t win the next game. It hurt me and all my team because these messages that were intentionally leaked to the media created negative feelings with the squad, they created doubts and misunderstandings.

At least I had some marvellous lads that would stand with me until death. When things got ugly they saved me with great victories. Because they believed in me and they knew I believed in them.Of course I’m not the best coach in the world, but I’m capable of giving each one the strength and confidence they need at work, be they players, coaching staff or any employee. I know perfectly well what a team needs. In the roughly 20 years I’ve spent at Real Madrid I’ve learned that you guys, the fans, you want to win, of course. But above all you want us, the coach, the staff, the workers and of course the footballers, to give everything. And I can assure you that we gave 100% of ourselves for the club.

I also want to use this letter to send a message to the journalists. I’ve done hundreds of press conferences and unfortunately we’ve spoken very little about football and I know you love football too, this sport which unites us all. However, without wanting to criticise you or give lessons I would have liked it if your questions weren’t always directed towards controversy, I would have liked us to talk more about the ball and above all the players, who are and always will be the most important thing in this game. Let’s not forget about football, let’s look after football.

Dear Madridistas, I’ll always be one of you.