Pep Guardiola has challenged his Manchester City players to prepare for their Champions League showdown with Real Madrid by winning the FA Cup.

City will face Real in the end-of-season mini-tournament when they return to European action and having passed their Premier League crown to Liverpool last week, they are determined to add another trophy to their collection before locking horns with the Spanish giants.

They took a significant step towards doing so on Sunday when they booked an FA Cup semi-final with Arsenal by beating Newcastle 2-0 at St James’ Park, and Guardiola is in no mood to let his men stop there. 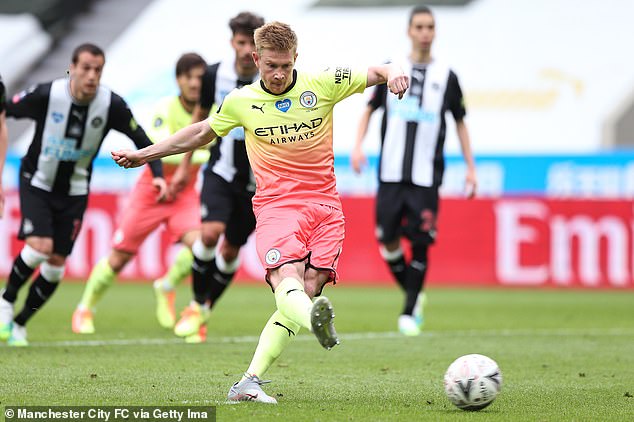 He said: ‘We are delighted after the defeat against Chelsea to be in London again at Wembley to play against Arsenal in the semi-final to try to reach the final of the FA Cup.

‘Always it’s an incredible trophy and it gives us an extra bonus. We spoke after what happened in the Premier League – we need two more victories to qualify for Champions League.

‘But we have two competitions we can win. We made the first step today. It will be good to arrive against Real Madrid in the best condition.

‘To win this title would be the best way to prepare for Madrid.’ 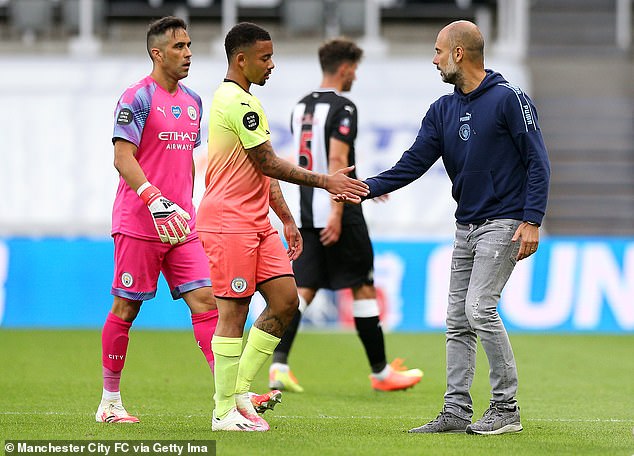 City were utterly dominant on Tyneside, where they drew in the league earlier this season having lost 11 months earlier, but needed a rush of blood from defender Fabian Schar to open their account.

Schar needlessly pushed striker Gabriel Jesus to the ground inside the box to hand Kevin De Bruyne the chance to celebrate his 29th birthday with a 37th-minute penalty, and he duly obliged.

Despite their inferiority on the night, Newcastle should really have levelled when substitute Dwight Gayle fired over from point-blank range with 66 minutes gone, and Raheem Sterling made him pay almost immediately with a neat finish to wrap up victory.

Guardiola said: ‘It was a fantastic goal from Raheem. For the penalty, I didn’t see the review. Gabriel Jesus could have headed the ball and I think the opponent pushed him.

‘De Bruyne is definitely reliable and hopefully he can carry on because we struggled a lot this season with this.’ 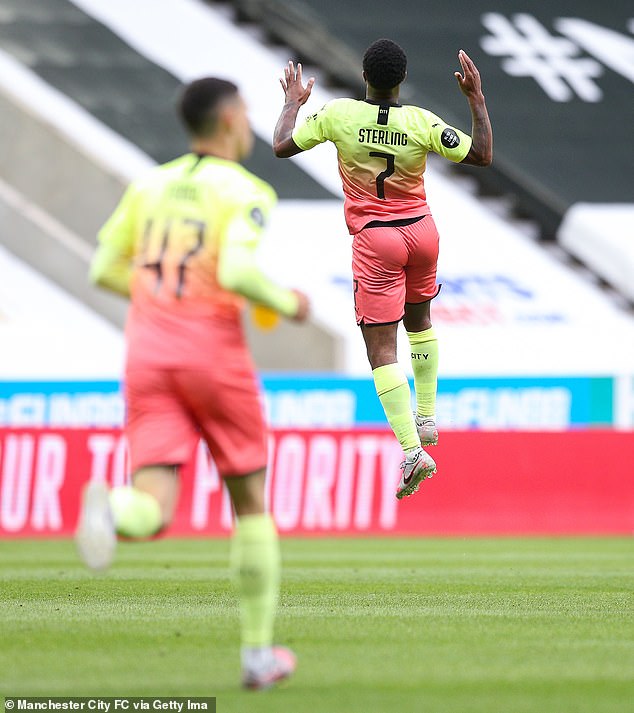 City comfortably beat Newcastle, but have already lost the Premier League to Liverpool

It proved a disappointing evening for Magpies head coach Steve Bruce, who admitted his side’s first-half display had not been good enough.

He said: ‘When you’re playing against teams like this, you can’t make the type of mistake we have done for the penalty. Unfortunately, we gave a poor, poor penalty away and it’s difficult enough because of the ability they’ve got.

‘In the second half, we were much better and brighter, and the big turning point – could we have made it a really good cup tie had we equalised?

‘Who knows whether we would have been able to go on from there, but we were certainly better in the second half.’