Paul Ince has revealed his disappointment that Terry Venables did not continue as England manager after Euro 96. ‘El Tel’ came up agonisingly short in his bid to become the first Three Lions boss to get his hands on silverware since Alf Ramsey in 1966.

England reached the semi-finals of Euro 96 only to be knocked out by Germany in an agonising penalty shoot-out defeat at Wembley.

The Three Lions enjoyed a brilliant summer before the last-four heartache under Venables’ guidance.

The hosts kicked off the tournament with a draw against Switzerland before a 2-0 win against Scotland. They ensured top spot in Group A thanks to a 4-1 spanking of the Netherlands, which will be replayed on ITV4 this evening.

Ince was suspended for the quarter-final penalty shoot-out win against Spain before returning to the team for the infamous exit at the hands of Germany. 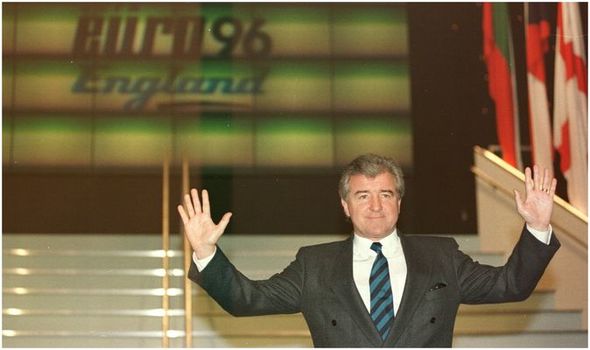 “I believe the FA had two of the best English managers in Terry Venables and Glen Hoddle and they sacked them both for unrelated football reasons, which for me is a disgrace when you consider what Sven Goran Eriksson got up to when he was England manager, and I’ve got no time for the FA for that,” Ince said in a soon to be aired Paddy Power interview series with Ruby Walsh.

“Terry Venables was immense, he was one of the lads, but you knew where the lines was with him, he was a man manager, everyone loved him everyone got on with him.

Venables began his managerial career at Crystal Palace and Queens Park Rangers before moving to Barcelona in 1984. He led them to La Liga glory in his maiden campaign before guiding them to the final of the European Cup in the following year.

The former midfielder returned to England with Tottenham and led Spurs to the 1991 FA Cup. He was back in the England set up as Steve McLaren’s assistant but the duo were fired after the failure to qualify for Euro 2008.