Julen Lopetegui’s side eventually triumphed 5-3 in a carnival atmosphere at the Ramón Sánchez Pizjuán Stadium on Sunday afternoon.

But it was former Atletico Madrid midfielder Torres’ virtuoso strike after just eight minutes which set the tone for a rollicking contest in southern Spain.

Sealed with a kiss: Oliver Torres’ wonder goal was the toast of Seville as his side triumphed 5-3

Left-back Ludwig Augustinsson sent a high driven corner over the throng of players jostling centrally to Torres, standing very wide and about nine yards out.

In a cross between Paul Scholes’ volley against Watford and Marco van Basten against the Soviet Union, Torres struck across the ball sweetly to send it arrowing viciously into the top corner for a memorable, picture-book goal.

Rafa Mir, signed from Wolves in the summer, doubled the lead, cutting inside his man and beating Aitor Fernandez at his near post with a powerful low shot.

Levante then halved the deficit via Jose Luis Morales, latching onto a crossfield pass after a fine dummy and lashing it into the top corner.

Sevilla centre-back Diego Carlos had the final say of the first half, nodding home to restore the two-goal advantage at the break.

Ex-Barcelona forward Munir El Haddadi made it four five minutes after the break, controlling a simple square pass from Torres and finding the bottom corner with a 25-yard effort. 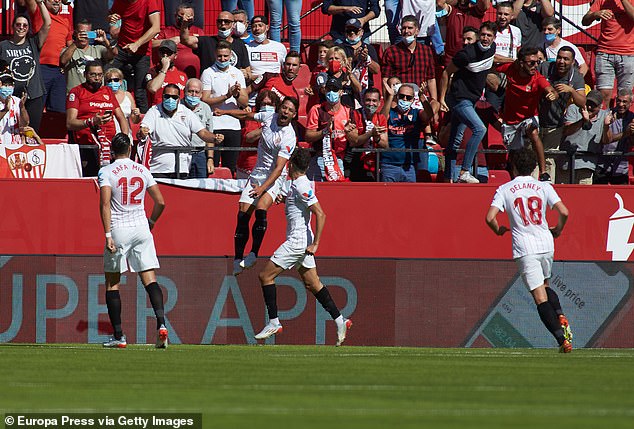 But after former Charlton goalkeeper Marko Dmitrovic raced out of goal and missed his clearance, Morales tapped into an unguarded net in an attempt to inspire an unlikely comeback.

Just after the hour, more poor home defending saw Gonzalo Melero tap home off the crossbar to make it 4-3 and potentially give Sevilla jitters.

But ex-Manchester City defensive midfielder Fernando got a rare goal, latching on to a cross from the right and turning it past the hapless Fernandez to make it 5-3 after 64 minutes, in what – surprisingly – proved the last goal of the encounter.

The result pushed Lopetegui’s Rojiblancos up to second in the league table, ahead of third-placed Real Sociedad on goal difference and, at the time of writing, behind Real Madrid.

Los Blancos also have 20 points after their nine games, with six wins, two draws and one defeat so far this campaign, but have a goal difference of +13 to Sevilla’s +10 and Sociedad’s +5.

Relegation-threatened Levante, meanwhile, remain second bottom with Alaves in 18th and Getafe in 20th having played one game less.