Oleksandr Zinchenko has joked that excited Arsenal fans confused him for Kevin De Bruyne ahead of his move to the club. The Ukraine international has joined the Gunners for £32million from Manchester City.

Zinchenko was linked with Arsenal earlier in the summer and interest picked up in the last fortnight. After a fee was agreed with City, he flew across the USA to join up with Mikel Arteta’s squad on their pre-season tour.

Arsenal unveiled Zinchenko on Friday and he did his customary media duties with the club. He also sat down with ‘Frimmy’ on the daily tour video update to discuss the move.

Frimmy, who is close to the squad in the USA, told Zinchenko he had received a lot of messages from Arsenal supporting friends asking if a deal for the 25-year-old was happening. But Zinchenko joked they got confused with another City player in De Bruyne, who he has been likened to in the past.

He said: “Do they know that I’m not De Bruyne? Straight away I need to ask because maybe they’re confused. You surprised me, you surprised me a bit.”

Zinchenko claims he is more handsome than his blonde ex-team-mate but cannot compare with his footballing ability. He continued: “[The comparison] was just in the beginning.

“I’m much, much, much more handsome than him. We’re not talking about football skills but come on, you cannot compare. He knows, he knows.”

Zinchenko has already trained with his new team-mates and could be in contention to play the friendly against Chelsea in the early hours of Sunday morning. Speaking to the Arsenal media team, he claimed it was a dream come true to join the north London club. 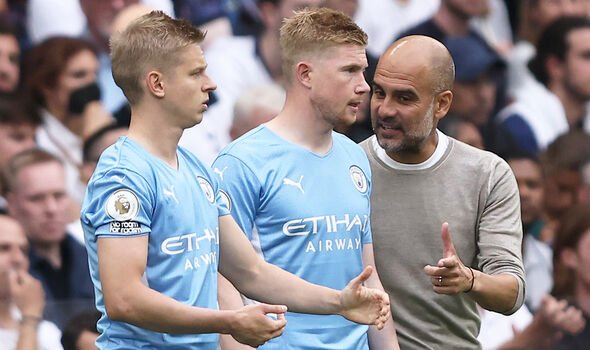 He said: “First of all I would like to say this is a boyhood dream come true, because I was a massive fan when I was a kid. Since Thierry Henry and young Cesc Fabregas was playing here, I was just enjoying watching those games, that Arsenal.

“And obviously I started to love this club, so I am so excited and I cannot wait to play for this amazing club.” Arsenal boss Mikel Arteta knows Zinchenko well from his time as assistant to Pep Guardiola at City.

“It’s something, and a quality, that in my opinion for any footballer is something unique.”