‘I don’t think anyone would have been surprised’: Ole Gunnar Solskjaer says Oriol Romeu could have been sent off for his challenge on Mason Greenwood

Ole Gunnar Solskjaer claimed that Southampton’s Oriol Romeu could have been sent off for an ugly challenge on Mason Greenwood after seeing his Manchester United side concede a late equaliser at Old Trafford last night.

Romeu escaped punishment from referee Chris Kavanagh after sinking his studs into Greenwood’s left ankle and VAR also took no action against the Saints midfielder.

‘I don’t think anyone would have been surprised if there had been a different outcome,’ said Solskjaer. ‘I mentioned it to the fourth official.

‘My ankle would be gone and I’d be out for a month. But he (Greenwood) has got strong ankles and it’s up to the referees to make the decision.

‘It was a nasty one but we’ve said enough about VAR.’

As it was, United were the team left with 10 men late on after Luke Shaw limped off and his replacement Brandon Williams followed with a gash to the head.

‘Luke twisted his ankle,’ added Solskjaer. ‘Hopefully we can have some good news on him after the scan. Brandon has a cut above his eye. I’ve not been to see him, he’s with the medical staff.’ 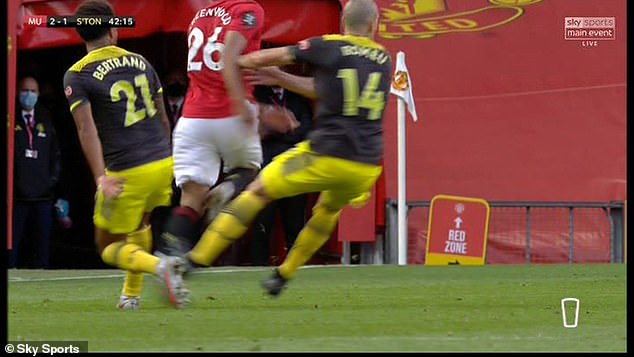 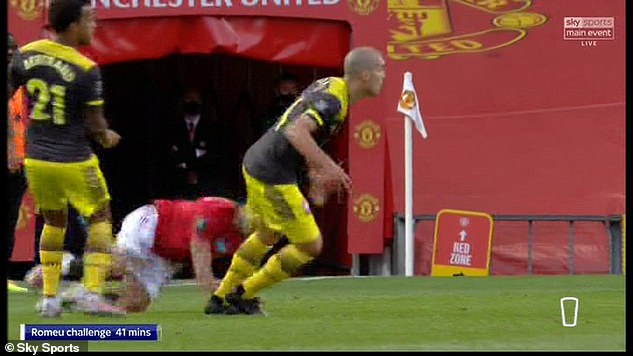 Southampton took full advantage as substitute Michael Obafemi made it 2-2 in the sixth minute of added time.

United kept their 18-match unbeaten run intact but blew the chance to move into the top four after Chelsea and Leicester lost over the weekend.

‘We didn’t have too many minutes to see it out with 10 men so we should have done better,’ said Solskjaer.

‘It’s the worst time to concede goal but that happens in football. It’s always disappointing to get that in the 96th minute. I know the feeling the other way as well.’ 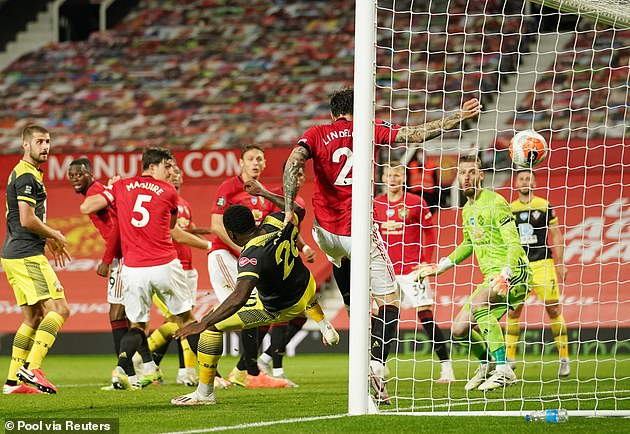 United skipper Harry Maguire was angry that his side had conceded from a set-piece, saying: ‘The guy can’t get a header in at our front post when we have four men around it. The set-play has killed us at the end.’

Southampton boss Ralph Hasenhuttl was delighted with the result as his side continued their fine form since the restart.

‘We developed our game with the ball extremely in the last few weeks.,’ he said. ‘We are becoming more brave. We are taking more risks. If you take more risks things can happen.

‘We wanted to be brave, we have nothing to lose and we can play free. You can feel the guys really enjoy at the moment.’

Related posts:
Previous Post: EIGHT things we learned from the Styrian Grand Prix
Next Post: Manchester City had a legal team as strong as their playing squad