Manchester United boss Ole Gunnar Solskjaer is finding life “easier” at the club because he has been able to settle on his defence, says former Tottenham midfielder Tim Sherwood. United are on a run of eight games without defeat in all competitions, conceding just two goals in that time. They now sit fifth in the Premier League, which currently would be enough to qualify for next season’s Champions League due to rivals Manchester City’s two-year ban from European competition.

Sherwood has been impressed with what he has seen from United of late ahead of Sunday’s Premier League visit of City.

The pundit claims it is now more straightforward for Solskjaer to pick a starting XI than it was earlier in the season.

And Sherwood says that is because of the form of the defence, namely centre-backs Harry Maguire and Victor Lindelof and full-backs Aaron Wan-Bissaka and Luke Shaw.

“I would have to say [it is] an improving Manchester United,” Sherwood said on the Analysis Show.

“I know they had a good result at the Etihad [earlier this season], they played a nice counter-attacking style.

“But I believe it’s easier now to pick a Manchester United team, especially at the back.

“[It] almost picks itself now.”

Earlier this week, Solskjaer admitted his squad are heading in the right direction but he is still not completely satisfied.

“I feel that this squad is going places, that the players are taking on board what we’re trying to sell to them,” Solskjaer said.

“The camaraderie, the effort, the attitude is getting better and I can see more of me in this team than before.

“We’re getting there day by day. There are still some days here where I’m not 100 per cent happy with what’s happened, but you understand. 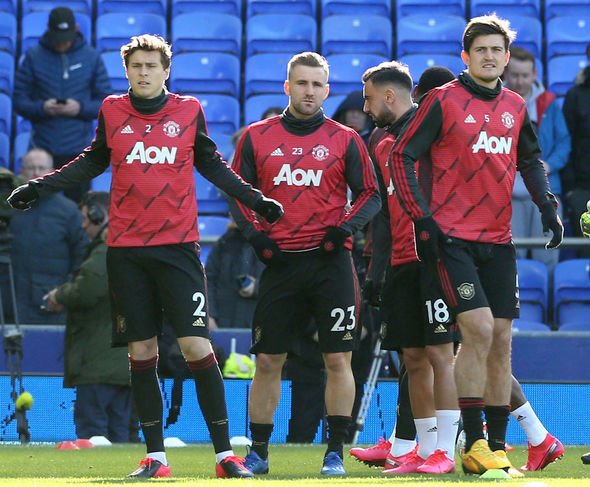 “We’re human beings, they’re disappointed, but get on with it. I’m not going to feel sorry for you.

“You have to make yourself available for the next game, and competitive situations are what I like.

“I like to see players who say, okay, he’s left me out for two or three games without explanation.

“I don’t have to explain every time. Sometimes I do yeah, but it’s a way for me to say I need more.

“You just can’t speak to them 100 times and say we need a change in you. You’ve had opportunities.”