England supporters of a certain generation will not have fond memories of Nuno Gomes.

The ex-Portugal hit-man memorably broke Three Lions hearts at Euro 2000 to score the winner in a stunning 3-2 comeback for his country in the group stages against Kevin Keegan's men.

And he was also an important part of the teams that knocked England out of both Euro 2004 and World Cup 2006.

Gomes was a menace at club level, too, spending the majority of his career at Benfica, where he scored 166 goals in two separate spells.

And ahead of the first leg of his former team's Europa League tie against Arsenal on Thursday, Gomes – with his trademark long locks tinged with a hint of grey – spoke exclusively to Mirror Football via Zoom.

"We cannot deny it has been a disappointing season so far for Benfica," he admits, with the side languishing in fourth place in the Primeira Liga.

"The team have lost the League Cup and Super Cup finals, and the board and the manager can't be happy with the performances so far.

"But a club like Benfica always has big players, and if you have big players things can always turn around.

"It is the same for Arsenal – they were having a bad season but must always be considered one of the favourites to win the tournament because of their history."

So, who should Gunners fans watch out for ahead of Thursday's clash in Rome?

"We have players with plenty of Premier League experience, such as Jan Vertonghen, Nicolas Otamendi and Adel Taraabt," Gomes continues.

"And up front there is Darwin Nunez from Uruguay. He's not playing at his best but is big, powerful, and can cause Arsenal problems, I hope!

"I couldn't bet on the winner of the game – without the fans in the stands, and at neutral grounds, neither team has an advantage over the other. It's too close to call." 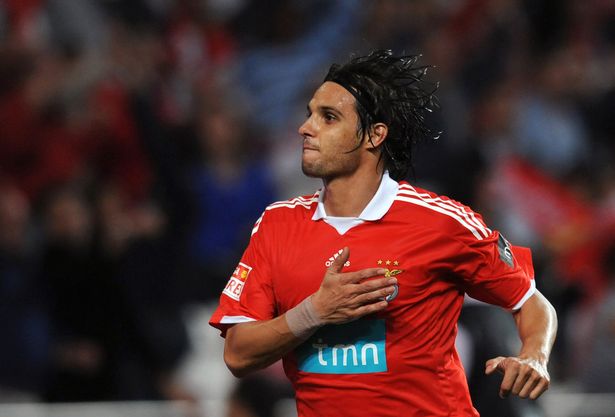 Gomes may not bring back good memories for the majority of the country, but he did enjoy an all-too-brief spell at Blackburn Rovers in the Championship in the 2012-13 season.

Not many would consider swapping Lisbon for Lancashire as a dream move.

But in the twilight of his career, Gomes says it was impossible to turn down Rovers' advances.

"At the time I was 33 and beginning to think about hanging up my boots," he recalls.

"But deep down I still felt fit and good to play. I received an offer from Blackburn, who were investing to get promotion, and we decided as a family to go for it because the chance to play in England was something I couldn't refuse."

Despite Gomes getting off to a good start in which he scored four goals in his opening six games, off-field issues with the infamous Venky family saw Blackburn's season go off the rails, and the striker failed to find the back of the net again as Rovers eventually finished 17th. Nevertheless, Gomes has nothing but fond memories of his time at Ewood Park.

"The club was well-organised for infrastructure and had a good academy, a good stadium, and loyal and passionate supporters," he says.

"It's just a shame things were so difficult off the pitch, and at the end of season I decided to retire as I had the Benfica president asking me to start to work with him at the club as a director.

"I was living in Manchester and to tell you the truth I really loved spending that time there. The people were amazing and we still go there often – we enjoy the culture and way of life.

"England may rain and get dark too early but at least the country is prepared for it!"

And Gomes says he still keeps in touch with a number of his former Rovers teammates.

"I speak with David Dunn from time to time and it's great to see him starting his career as a coach. Also Danny Murphy and Scott Dann." But could he have made a move to England any earlier in his career?

"I was close to Liverpool once, while I was playing for Fiorentina," Gomes reveals.

"But at that time, in 2001, the offer came right in the middle of my first season in Italy and I was enjoying it – the Serie A was very strong at the time. So in the end it didn't happen.

"There were also some talks with Tottenham and West Ham later, but nothing materialised."

Nowadays Gomes works as a pundit and is also an ambassador for the upcoming European Championships.

Naturally, he has been keeping a close eye on Portugal's latest star and Manchester United's saviour – Bruno Fernandes.

"He is doing very, very well in the Premier League, and I believe at the moment Bruno, Cristiano Ronaldo and Joao Felix are the three heroes in Portugal," Gomes continues.

"We all watch Fernandes' performances and of course we are very happy that he is doing so well because the Euros are coming and he needs to keep performing. "He totally improved United's situation when he came in and I believe he has been a complete game-changer.

"I believe Portugal can win the Euros again but we have a very tough group with France, Germany and Hungary, so who knows?"

And what about England?

He smiles. "Yes, you have a strong team too."

At least this time round there will be no Gomes to end English dreams once again.