A photo to forget! Mohamed Salah selflessly takes a SELFIE with a member of Nigeria’s coaching staff on the pitch at full-time after talisman’s Egypt side fell to a limp defeat in their Africa Cup of Nations opener

Mohamed Salah bizarrely took a selfie with a member of Nigeria’s backroom staff after Egypt were condemned to defeat in their first Africa Cup of Nations match.

Liverpool superstar Salah, a talisman for his country on the international stage, was kept quiet in the clash – and later left the pitch looking crestfallen at full-time.

To make matters potentially worse for him, he was asked to take a picture by a coach, but duly agreed to it in a touch of real class.

In footage now widely shared across social media, the forward looked to walk off the field before being pulled over by the star-struck individual.

The coach, seemingly with his phone already in hand, then took the snap he will remember for a lifetime, with Salah just about managing to hide his disappointment.

Salah even placed his arm around his fan, further underlining his sportsmanship. 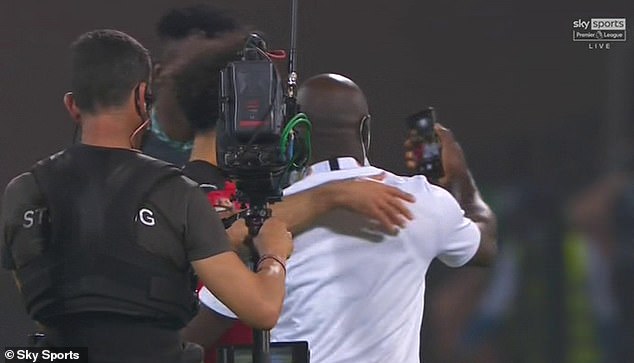 At full-time, a member of Nigeria’s coaching staff had asked Salah to take a selfie with him 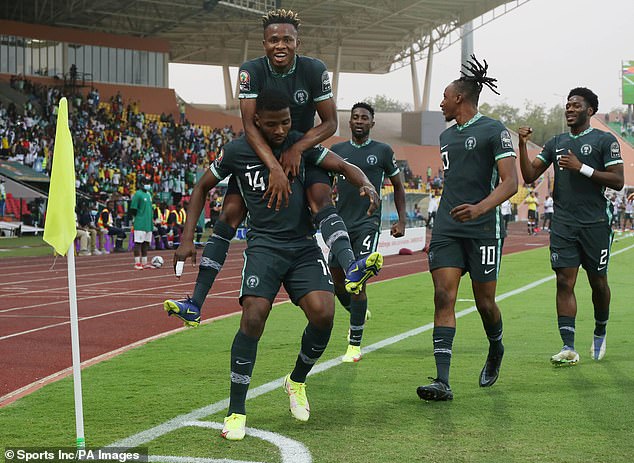 Kelechi Iheanacho (centre, bottom) scored the only goal of the game to seal Nigeria’s victory

After that, the 29-year-old was able to walk back to the dressing room.

Egypt delivered a disappointing performance in the clash, with Salah in particular failing to inspire his side on to claw back a goal after they fell behind.

He was restricted to just a small number of dribbles, and also attempted just one shot throughout the entire clash, with resulted in a block.

The opener came from Leicester marksman Kelechi Iheanacho, who controlled the ball superbly on the edge of the penalty area before lashing into the net. 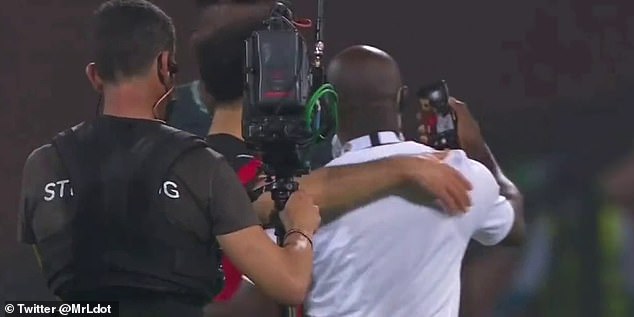 After that, Nigeria looked to seize the impetus in a bid to double their lead, and Taiwo Awoniyi’s effort was brilliantly kept out by Mohamed El Shenaway.

Iheanacho was guilty of a sloppy touch when presented with a chance to notch his brace, while Salah was unable to clip the ball over Maduka Okoye in behind.

That meant that Egypt fell to the narrow defeat, and they take on Guinea-Bissau next, desperately in need of a win to ignite their campaign in Cameroon.