Los Angeles FC produced an incredible tribute to late basketball superstar Kobe Bryant in their first competitive game since the star’s tragic death. Players wore black armbands and a tifo was displayed for their clash with Leon in the CONCACAF Champions League.

LAFC played their first competitive game of the year on Thursday night, as they hosted Mexican side Club Leon.

In the build-up to the opening of the MLS season this weekend, fans flocked to the Banc of America stadium to see the first-team put through their paces in the CONCACAF Champions League.

The Los Angeles Lakers icon died in a helicopter crash on January 26, along with eight others – including his teenage daughter, Gianna.

Bryant was a cultural icon in the city of LA, having spent the entirety of his 20-year NBA career with the Lakers.

After his passing, fans flooded the streets to pay tribute to the 42-year-old, and thousands turned out for his memorial service at the Staples Center on February 24.

For LAFC, Thursday marked the first time they were playing in front of their home fans since the tragic incident.

And to pay tribute to Bryant, a tifo display was commissioned to be hung behind the goal.

The tifo showed Kobe and Gianna with the words “Kobe & Gigi Forever’.

Fans around the tifo wore purple t-shirts in a callback to the Lakers’ home colours.

As well as the tifo, players wore black armbands with the numbers 24 and 8, the names of all those who died in the crash and the initials KB. 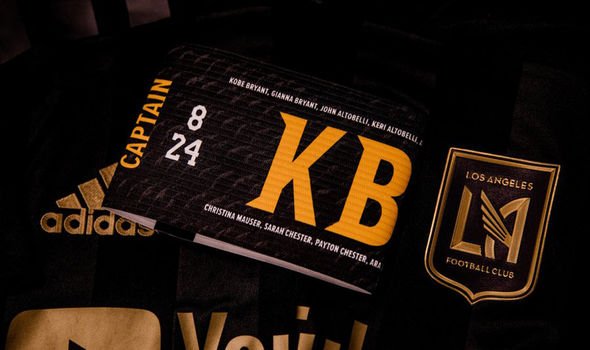 “I think the most important thing is the way he played,” he said when asked what lessons he had learned from the NBA icon’s career.

“The ambition he showed every time he came to the court, and the mentality. He wanted to win every time.

“He did his best with every second he spent in the sport. It’s something every athlete can learn from.

“Of course he was inspirational for all players, he was a big legend for us. We’re trying to get something for our fans – the way he did that was incredible.”