‘We have to fight for the Champions League’: Mikel Arteta admits European qualification is imperative for Arsenal

Mikel Arteta insists his players are already primed for the pressure they are now facing to get Arsenal into the Champions League.

Their shock Europa League exit at home to Olympiacos has left Arsenal with just one route into Europe’s top competition this season, via their Premier League position, ramping up the importance of their remaining league games, starting with the visit of West Ham.

Arteta has admitted no Champions League football will make it ‘difficult’ for Arsenal to attract big names but also keep their best players.

They have 11 games to secure it but are only five points off fifth place which might be enough this season due to Manchester City’s Champions League ban.

Chelsea, in fourth, are only a further three points away.

Arteta said: ‘The players know the demands of playing for this club and if we don’t reach any European competition we know what the meaning of that is so they don’t need any more pressure.

‘They absolutely know where they are. The challenge for the players, just to wear that shirt is big enough and I don’t think they think too much about the objective of the Champions League or the Europa League or the relegation zone when we were talking about that, when we were four points behind, which is a much worse pressure I believe as well. 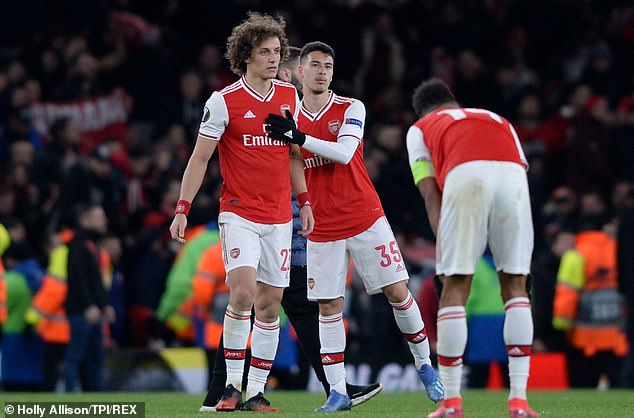 The Gunners suffered a shock, late Europa League exit at the hands of Olympiacos

‘They are dealing with the situation. We try to help them to focus just on what they have to do on that pitch and the rest will come naturally.

‘Of course as Arsenal players, as a club, we have to fight for the Champions League but we have to go game by game, try to beat West Ham first and we will be closer.

‘That’s all we can control because at the moment it is not in our hands. It is in the opponents hands. They have to fail and we have to win games to have a chance.’