Marcus Rashford says seeing his personal appeal for the government to support disadvantaged children through the summer forced Prime Minister Boris Johnson to take action. The Manchester United forward took the lead in a campaign which pushed for children who receive free school meals during term time to be helped during the upcoming holidays.

Having originally rejected the proposals, Johnson performed a U-turn on Tuesday, with £120m set to be pumped into a fund which will benefit 1.3m children.

Rashford, who admits he was taken aback by the decision, spoke to Johnson on the phone after seeing his hard work pay off.

“I was obviously shocked, it’s a big decision for someone to make,” Rashford told the BBC. “I’m just grateful that the Prime Minister did change his decision and he understood.

“I spoke to him earlier on today and I just thanked him for that. It was a nice conversation to have with him and just that we understood each other.

“He was just obviously saying thank you for using what I’ve sort of built in a positive manner. We were just thanking each other really because he didn’t have to do what he did and neither did I.

“He was just grateful that someone basically just had an opinion and shared it with people and just been that voice for people that didn’t really have the platform to speak out as much as they would like to.”

BBC reporter Sally Nugent suggested the U-turn had come after Johnson was shown footage of Rashford discussing how important it would be for the food voucher scheme to continue.

The 22-year-old says that interview is what made Johnson stand up and take notice before reversing his original decision to reject the campaign’s plea.

“Yeah, he mentioned that on the phone and he just said that’s what sort of moved him really because he probably understood it a bit more, like hearing it from someone rather than just reading it all or hearing about it so I that that was obviously a key factor in him changing his decision,” Rashford said. 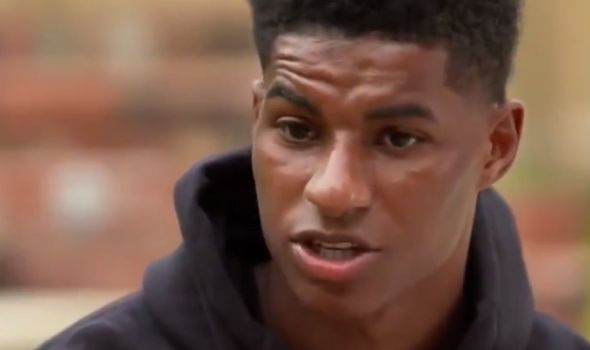 Rashford, who says United team-mates supported his campaign, admits he is proud to have been able to make a difference.

But he insists the fact people will be better off because of it trumps any personal benefit of changing the Prime Minister’s mind.

“It’s a nice feeling, but I’m just more happy that people’s lives and people’s summers especially are going to be changed for the better,” Rashford said.

“That was the important thing that I tried to change going into it. Coming out the end of it now it’s obviously a proud, proud moment.”