Manchester City are in hot water with UEFA again… but this time it’s because the tiny sponsor logo on their anthem jacket JUST exceeded the 20cm limit!

Manchester City are in hot water with UEFA again, just months after their alleged Financial Fair Play breach landed them with a two-year European ban.

This time though, the offence is something far more trivial after they were slapped with a £2,650 fine – because a tiny sponsor logo slightly exceeded the 20cm limit.

UEFA revealed on Wednesday that Manchester City had broken Article 29.02 of their code, which relates to sponsor advertising on anthem jackets and non-playing attire tops.

This kit, that City wear for the walk onto the pitch and while the Champions League anthem plays, has a tiny Marathon Bet logo just underneath the club crest.

Any sponsor logo on the anthem jacket must be smaller than 20cm, and UEFA have adjudged that City broke the rule, and they have now been fined.

The club are still reeling from the two-year ban handed to them for alleged breaches of Financial Fair Play regulations, with their case still being dealt with by the Court of Arbitration for Sport.

Article 29.02 relates to equipment regulations and City have been fined £2,650 by UEFA 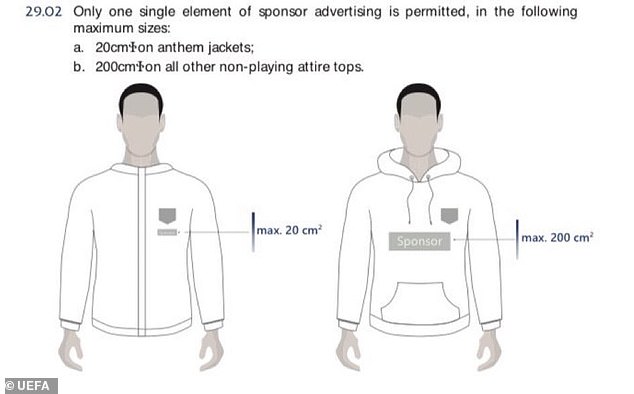