The positives to start with. This was actually quite an important victory for Manchester City, for RB Leipzig present the biggest obstacle to their progression from the group.

Jack Grealish sumptuously capped his first European night – the sort of occasion that made up his mind to leave Aston Villa. City’s supporters also appeared more engaged with the Champions League than before.

Now the other stuff. Pep Guardiola will wince when he watches this back. Less football, more basketball. Christopher Nkunku left with a hat-trick, City in danger of dropping points on opening night and 110 days after last season’s final. 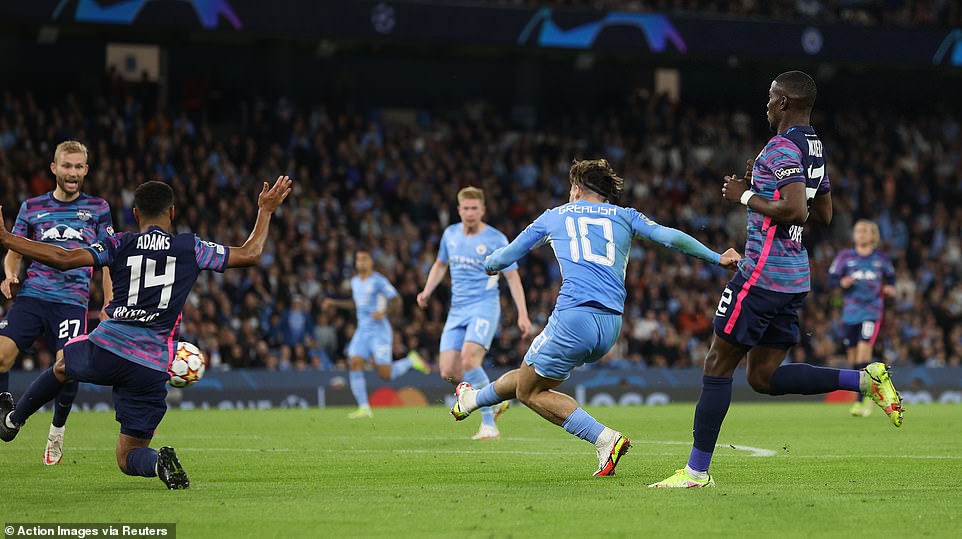 That would have come against a Leipzig team that has lost three of its first four Bundesliga matches and despatched by Bayern Munich at the weekend.

Yet they came away with victory regardless as Grealish and Ruben Dias both recorded different firsts.

Within weeks of his arrival from Benfica last year, word filtering out of the City Football Academy was that Dias appeared a readymade captain. There were those who felt Dias, who had instantly transformed Guardiola’s back line, represented an absolute certainty to form part of the team’s five-man leadership group this season.

The players and staff took that ballot this week and sure enough, Dias secured more than enough votes to become third in command, behind only Fernandinho and Ilkay Gundogan. With both on the bench last night, Dias took the armband ahead of the returning Kevin De Bruyne.

Dias was coy about the prospect when interviewed by Sportsmail earlier this year, almost bashful, but the desire to be handed greater responsibility was obvious.

When younger, his barking of orders has, on occasion, irked peers who felt that his vocality was for show. Staff at the Benfica academy had to teach him to only communicate with those within his immediate sphere – fellow defenders and central midfield – and over time, Dias has been moulded into an obvious captain.

It was his partner who kickstarted City’s season in Europe though. Nathan Ake had not been afforded a single minute of action since defeat at Tottenham a month ago, yet was given a chance here by virtue of injuries to Aymeric Laporte and John Stones.

But when Jack Grealish’s purposeful 16th-minute corner arced into an area to attack, Ake would not be beaten. With a free run at the grounded Willi Orban, Ake powered a header which Peter Gulacsi could only palm onto the bar and over the line. 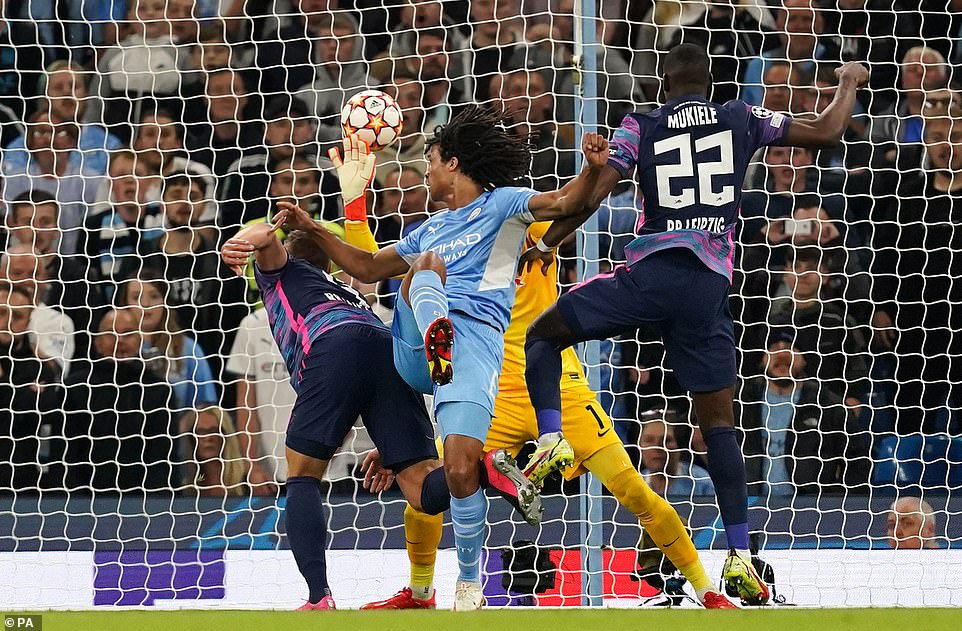 The opener came from a set piece but owed much to City’s sharpness in midfield, a crisp urgency that had lacked. Guardiola had appeared a picture of exasperation and after Oleksandr Zinchenko and Rodri cleverly – and quickly – worked angles in midfield to open the game in the build-up to winning that corner, their manager threw his arms out as if to say, “finally”.

City then settled into that familiar supreme dominance. A second immediately felt inevitable and the 45 or so Leipzig supporters could only watch grimly. Grealish cut in from the left, his effort blocked by Lukas Klostermann, before Ake could not quite stretch far enough to meet De Bruyne’s free-kick.

The lead was doubled shortly before the half-hour and in comical fashion. De Bruyne was beginning to rampage in his favoured inside-right channel, a troubling corridor for any opposition, and Nordi Mukiele’s eyes inadvertently lit up when the Belgian’s cross approached his zone. Grealish was the target at the back post but Mukiele beat him to it, nodding past his own goalkeeper. Fine header it was too, De Bruyne’s delivery deservedly finished off. 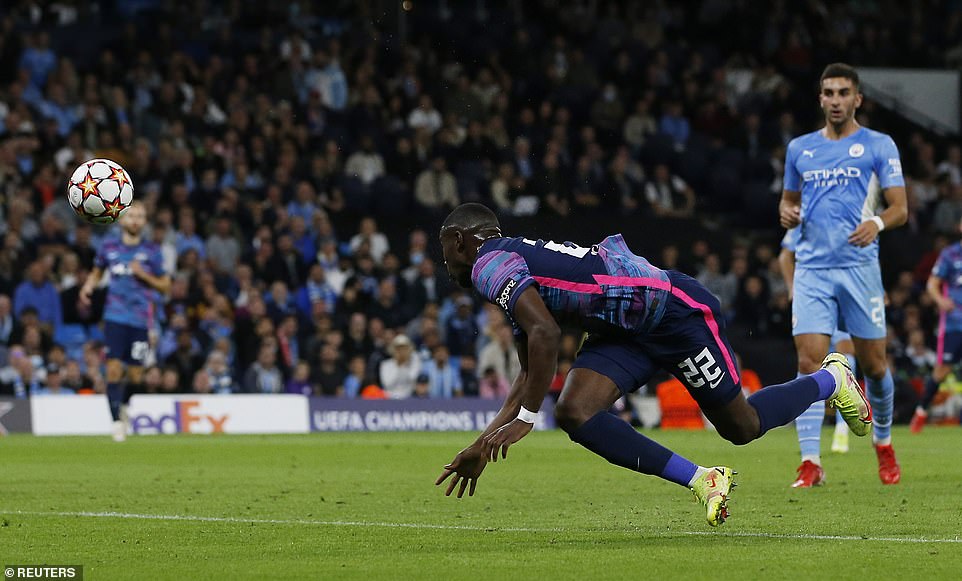 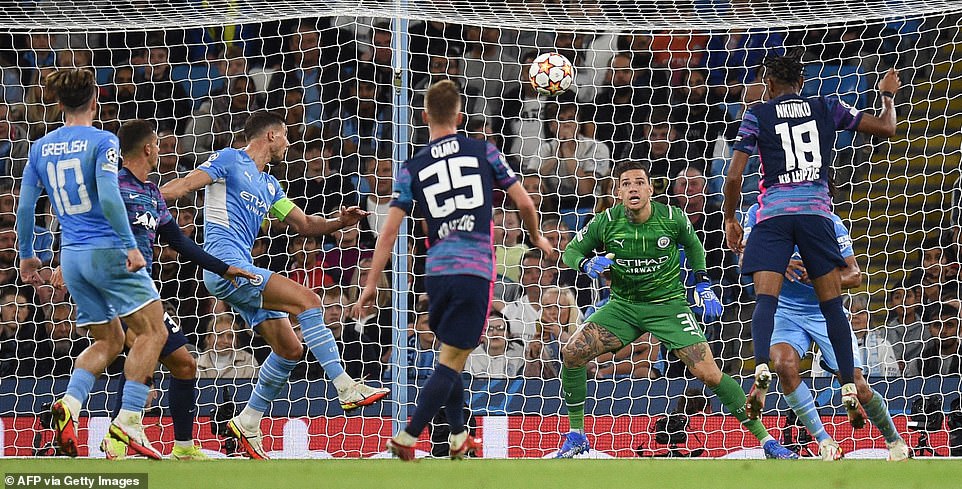 Mukiele did quickly make amends of some description and underfire Leipzig manager Jesse Marsch – who had been waving his fists in celebration at defensive blocks – saw a way back into the game just minutes ahead of the break. City were indecisive at the back, Joao Cancelo sitting off Emil Forsberg and the lofted cross found Mukiele. Suddenly Christopher Nkunku had the ball in Ederson’s net and suddenly the Germans had a sniff.

And then they did not. Klostermann led with his arm as he challenged inside the box and, after a VAR check, Serder Gozubuyuk pointed to the spot. Mahrez dispatched emphatically with effectively the final kick of the first half and City were back seemingly cruising.

There were hairy moments and the visitors found another way back into the tie on 50 minutes. Again, it came amid defensive confusion. Again, it was Nkunku. The striker nestled himself between Dias and Ake – who are not exactly familiar playing alongside each other – and planted a header into Ederson’s near post. 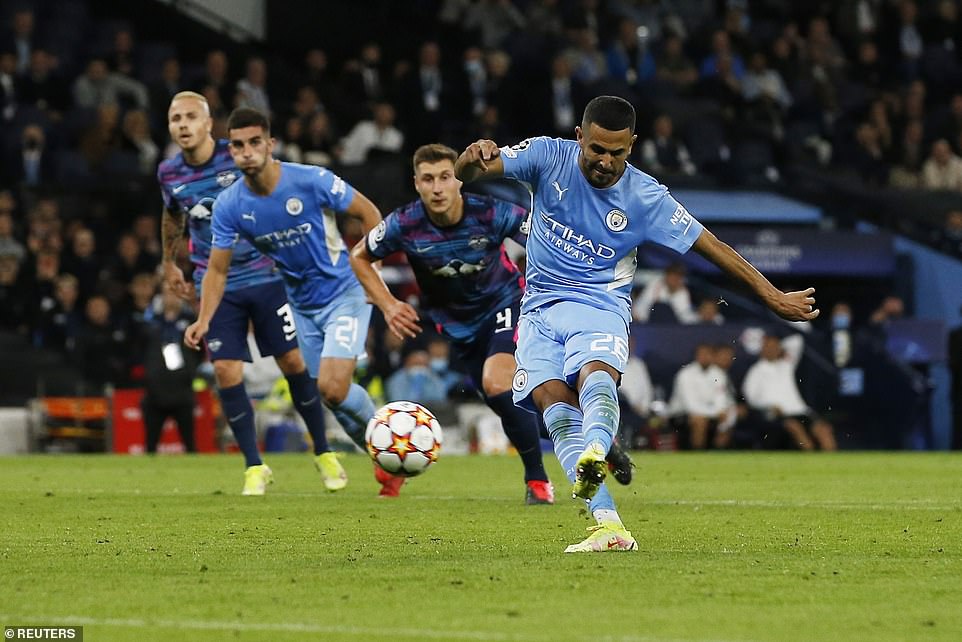 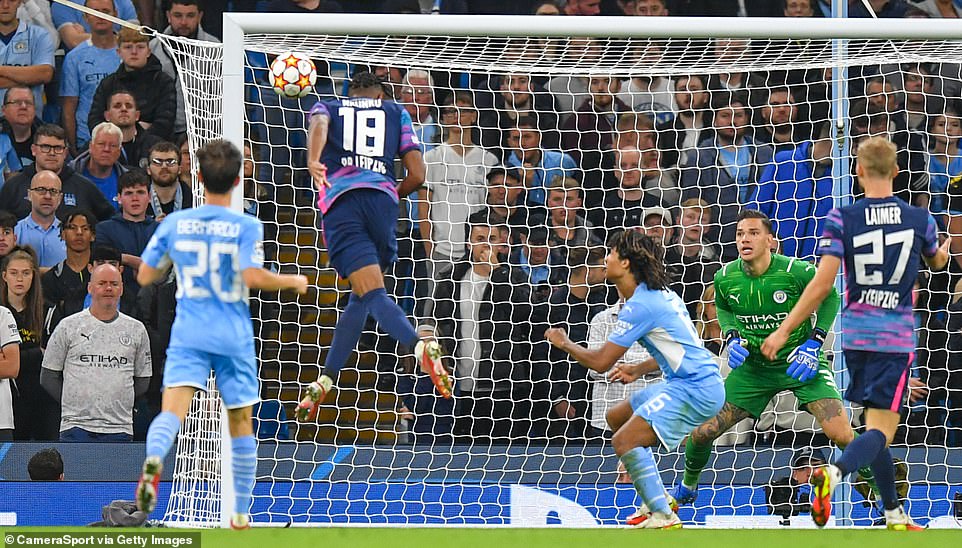 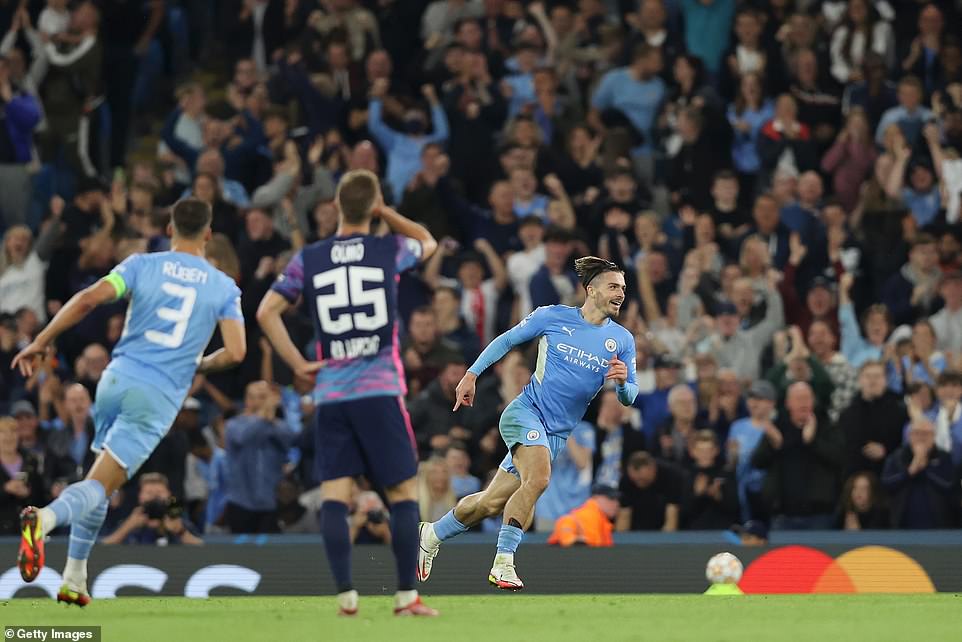 Leipzig earlier had the ball in the net on another occasion before half-time as well. Andre Silva – a summer signing from Frankfurt – allowed to loiter through and finish. Gozubuyuk’s assistant, however, raised his flag after the action had reached a conclusion. Silva had been more than a yard offside and everybody inside the stadium knew it. The charade of continuing moves despite clear infringements is frustrating supporters. Similar happened with Ferran Torres, who had even collapsed to the floor in celebration.

Grealish seemed to have sealed it on 56 minutes. He had beavered away all evening – City’s best player. Dias hooked a clearance high into the sky and the £100million record signing scampered off. He stood up Tyler Adams, shifting possession away from his marker, and curled high into the far corner. That is what they bought him for.

Leipzig kept coming. Nkunku broke clear and took Leipzig to within one as he steered his memorable hat-trick into Ederson’s far corner. Cancelo had other ideas, though, hitting back almost immediately by screeching home a fifth and substitute Gabriel Jesus later added a sixth; Angelino sent off. A breathless night when it really need not have been. 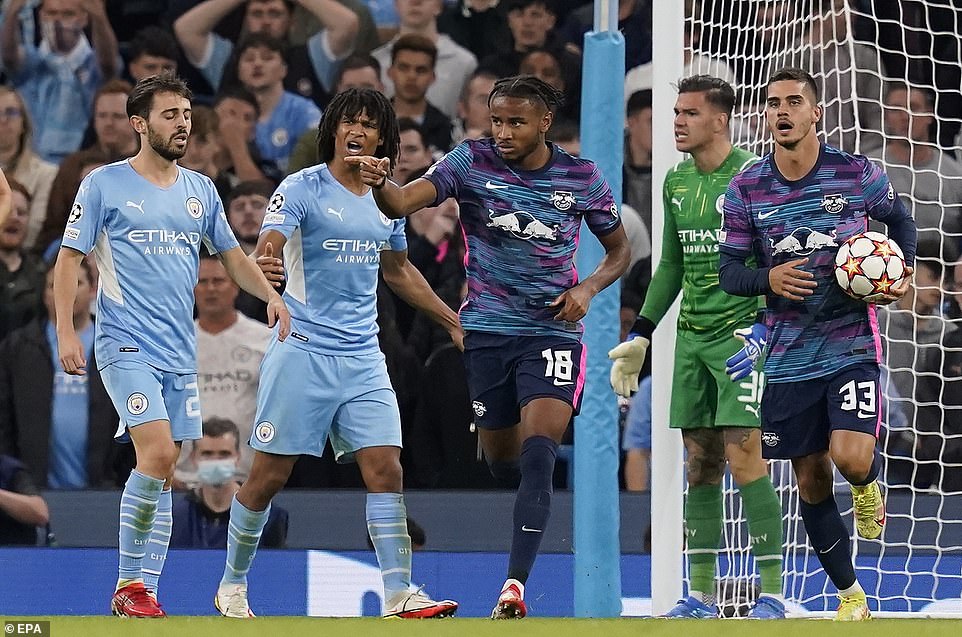 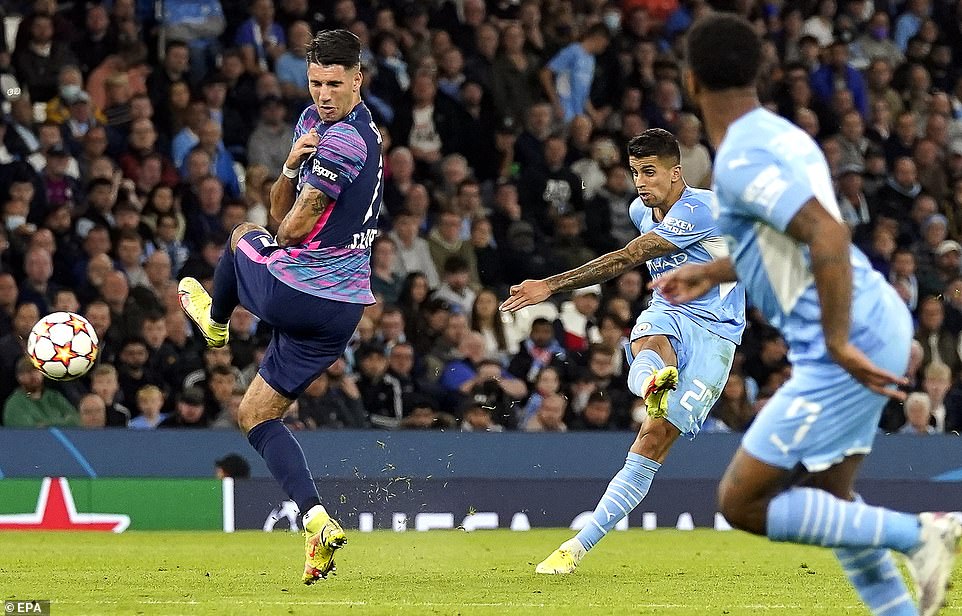 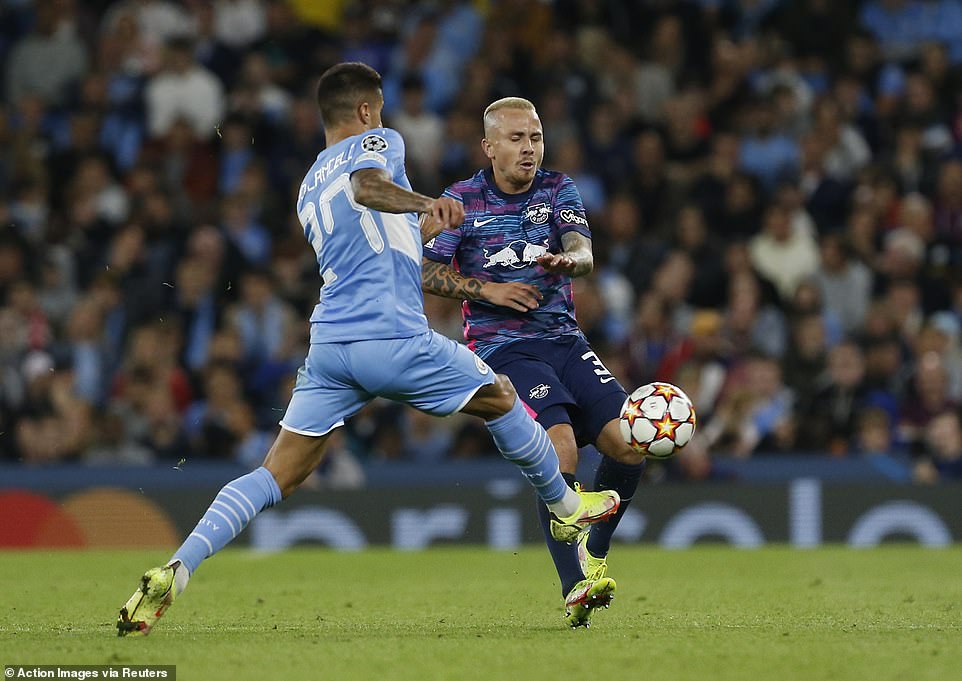 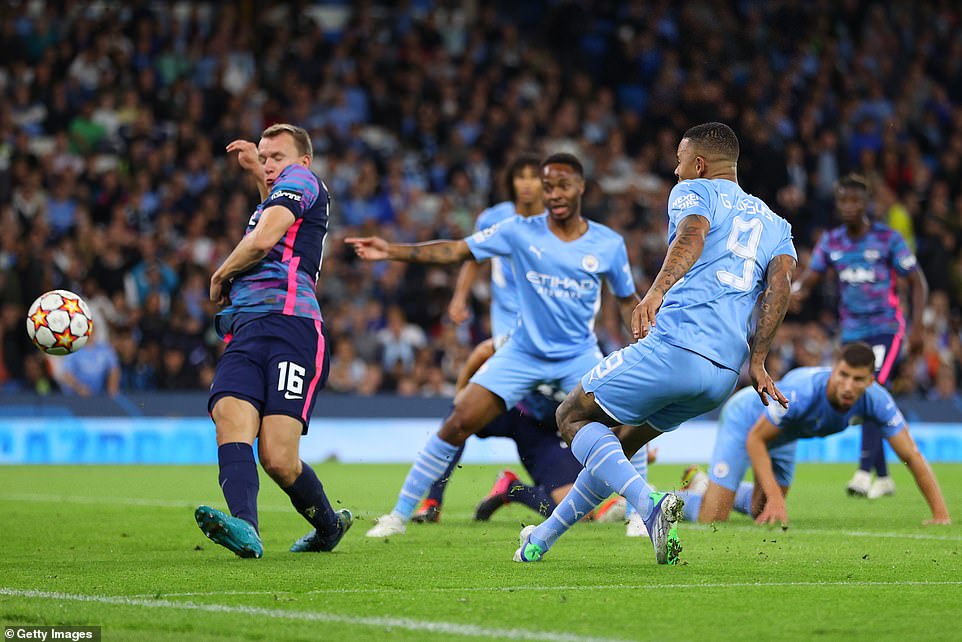