Manchester United want to make four more signings before the transfer window closes – including Frenkie de Jong. The Red Devils are still said to be confident they can land their man, despite his persistent desire to fight for his place at Barcelona.

Erik ten Hag has spoken to his former player on a number of occasions in a bid to entice him into a move to Old Trafford but so far, his efforts have failed to pay dividends.

De Jong is currently in talks with Barcelona over a salary reduction but Chelsea have also entered the race for his signature.

The Blues have opened discussions with Barcelona over a deal and are quietly hopeful they can land the Dutch maestro with Champions League football on offer at Stamford Bridge next season.

According to Rob Dawson of ESPN, De Jong is not the only signing in United’s crosshairs though as they continue to work on several other deals. 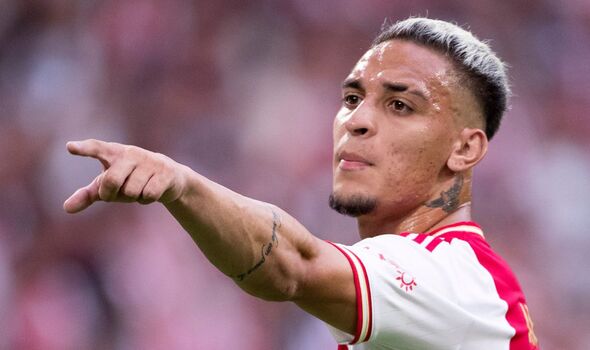 A forward, right-back and backup goalkeeper are also very much on the agenda – although there has been little progress on either to date.

Antony is United’s main forward target but Ajax have already ruled that the Brazilian will not be leaving the club under any circumstances.

They have slapped a whopping £84m price tag on his head in a bid to fend off interest from United, who have met with the player’s representatives on a number of occasions.

Benjamin Sesko and Sasa Kalajdzic are two of the names that are also of interest in terms of bringing in a new centre-forward.

At right-back, Sergio Dest and Denzel Dumfries are two players that appear to be highly rated by United.

As it stands, Diogo Dalot and Aaron Wan-Bissaka are set to battle it out for the No 2 shirt at Old Trafford ahead of the new season.

Dalot is expected to get the nod against Brighton but Wan-Bissaka could be pushed towards the exit door.

Ten Hag would still like to upgrade his options at full-back, although a new striker and midfielder are currently his priorities.

The signing of a new backup goalkeeper is also in the works following Dean Henderson’s loan move to Nottingham Forest.

Watford’s Daniel Bachmann was one name that was explored but to no avail after talks with the Championship club died a death.

Rangers goalkeeper Robby McCrorie and Newcastle’s Karl Darlow are two other names that have been linked.