Manchester United boss Ole Gunnar Solskjaer wants to strengthen his attacking options in the summer transfer window and the club have made Aston Villa star Jack Grealish a target. But amid this interest, the midfielder has now admitted that he is trying to follow the example of Red Devils legend Cristiano Ronaldo.

Grealish is putting in impressive performances for Villa this season despite being in the midst of a relegation battle with his boyhood club.

Villa are currently 19th in the table and two points from safety, but the club captain has still managed to score nine goals and provide eight assists in 31 appearances in all competitions.

His performances have attracted the attention of United and in a recent interview, the 24-year-old admitted he is trying to follow Ronaldo’s example.

Grealish used to watch how the Portugal international used to “thrive off the hatred” directed at him from the opposition fans and the Villa star is also trying to do the same.

“I love all that,” Grealish told the Express and Star.

“I love when people are on my back and targeting me.

“I always remember when I was a kid – and I am not saying I am anywhere near his level – but Cristiano Ronaldo used to come to Villa and the fans used to absolutely cane him.

“He used to thrive off it and that is what I try to do.

“I try to thrive off the hatred from the fans.”

Villa know their chances of keeping Grealish will be diminished if they drop down to the Championship next season.

United have started conducting background checks on Grealish but Villa are determined not to be bullied over their reported £80million valuation of the player, who is under contract until 2023.

Premier League matches are due to resume on June 17, and Villa will have the chance to move out of the relegation zone and up to 16th in the table if they can beat Sheffield United with their game in hand.

However, Grealish knows it is going to be a difficult task as before football was suspended Villa were on a run of four straight defeats, with their last win coming in a 2-1 victory over Watford in January. 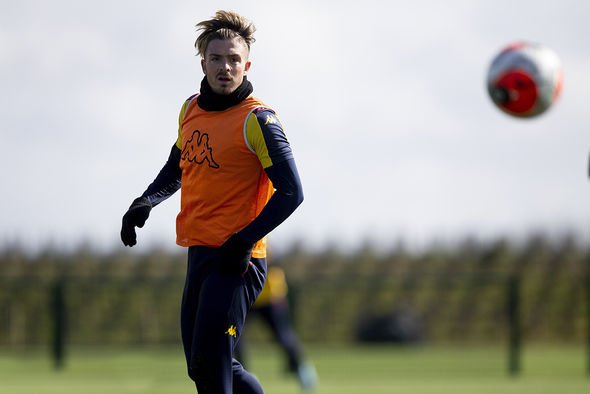 “It is probably going to be a tough run-in,” Grealish added.

“But there are also teams who have not got much to play for we are playing against so you can look at it two different ways.

“I am confident we will come back and play to the best of our abilities. We are looking fit as a team, probably fitter than we were at this stage in pre-season. We still have another two weeks and hopefully we can get fitter and more prepared than ever.”

The remaining matches of this season will be played behind closed doors and Grealish will miss having the fans at the games, he doesn’t think the players will complain about it.

“If we win our game in hand we are out of the bottom three and ready to go for the last nine games,” he continued.

“We can’t moan about the fact we might have had the fans there. We will just take it as it is because we are just delighted to be getting back.”