Manchester United boss Ole Gunnar Solskjaer is poised to make changes for his side’s Europa League semi-final with Sevilla on Sunday night. The Red Devils battled their way past FC Copenhagen earlier in the week to make the last four of the competition. And they’re now just two wins away from scooping the first piece of silverware of Solskjaer’s reign.

Eric Bailly did well for United against FC Copenhagen and there’s hopes that the Ivory Coast international has turned a corner at the club.

But, for the biggest match of the season so far, Solskjaer is likely to go full strength.

And that means it’s possible that Victor Lindelof gets the nod at centre-back, with the Sweden international enjoying a positive campaign at Old Trafford.

Lindelof has formed a strong connection at the back alongside club captain Harry Maguire, who has sparkled since his move from Leicester.

And it’s likely he gets selected for the match against Sevilla as a result.

Nemanja Matic was rested for the match against FC Copenhagen and entered the fray with the match in the balance.

And with Fred struggling against the Danish side, the Brazil international may have to settle for a place on the bench on Sunday night.

Matic has been reborn since January.

He looked set to leave the club that month but has since emerged as a vital and calming midfield presence, helping Paul Pogba and Bruno Fernandes shine.

Therefore, it’s possible he gets picked for the big one against Sevilla on Sunday night. 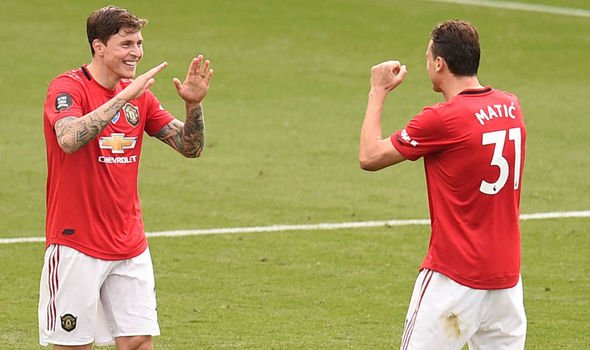 What Solskjaer said before Sevilla clash

Manchester United boss Solskjaer has insisted he’s unworried about the fixture schedule, despite the club likely to have little time to prepare for the new season.

“Absolutely no concerns about next season at the moment,” he said.

“We have good possibility to finish the season, this is the only way we could have done it.

“We have to use it as preparation for this tournament but also almost a pre-season for next season.

“We can’t complain because this is the world we are in now.”

What Fernandes has said before Sevilla clash

United midfielder Bruno Fernandes has praised his team-mates and the club for helping him to settle into English football.

The 25-year-old is poised to start against Sevilla and, on Saturday, said: “When a club pays for a player £55million you have confidence.

“All the conversations I had with my coach and my teammates has helped me. When you have that voice on your own back telling you to do your own game it is easier for you.”

On comparisons with Eric Cantona, he added: “For me Cantona was amazing player for the club, but I need to do much, much better to be compared to him. For me coming to Manchester is about winning trophies. I will be happy if we win the Europa League.”