Manchester United have stopped training amid the coronavirus crisis after considering the words of Prime Minister Boris Johnson. On Monday, Johnson outlined the Government’s plan to tackle the current issue and the Red Devils have now decided to halt training as a result.

Manchester United had originally planned to have their players train as normal as they target a place in the Premier League top four.

But, in the wake of Johnson’s advice, the Red Devils have now followed local rivals Manchester City in issuing their players with personalised fitness regimes to be undertaken remotely.

It was confirmed by United that they’ve taken this decision to protect their players from the coronavirus, which has already caused chaos for the footballing world.

Arsenal boss Mikel Arteta and Chelsea’s Callum Hudson-Odoi have contracted the virus so far in the United Kingdom.

And, abroad, the likes of Eliaquim Mangala and Daniele Rugani have also tested positive.

All Premier League games have currently been suspended until April 3 but, unless the coronavirus subsides, then the fixtures are expected to be postponed for even longer.

United are likely to back the season resuming, though, despite calls for it to be rendered null and void.

The Red Devils want to finish in the Champions League qualifying slots in order to give them the best chance of signing the likes of Jadon Sancho and Jack Grealish.

And that will be music to Liverpool’s ears with the Reds currently sweating on their chances of Premier League title glory. 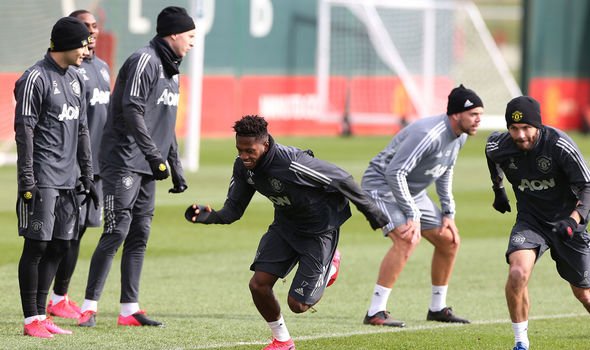 “It remains true – as we said in the last few weeks – that this sort of transmissions of the disease at mass gatherings such as sporting events are relatively low,” he said.

“But obviously, logically, as we advise against unnecessary social contact of all kinds, it’s right that we should extend that advice to mass gatherings as well.

“And so we’ve also got to ensure that we have the critical workers we need that might otherwise be deployed for those gatherings, to deal with those emergencies.

“So from tomorrow we will no longer be supporting mass gatherings with emergency workers in the way that we normally do.”

Johnson also said elderly and vulnerable people would have to start self-isolating for ‘around 12 weeks’ in a ‘few days time’.

“If you or anyone in your household has one of the two symptoms – a high temperature or continuous cough – you should stay at home for 14 days,” he added.

“That means that if possible you should not go out, even to buy food or essentials, other than for exercise and in that case at a safe distance from others.”

England’s chief medical officer Professor Chris Whitty then said: “People should be thinking of a minimum of weeks to months and, depending how it goes, it may be longer.

“It’s really important people realise they are in for the long haul on this.

“But this is really important, if we are to defend the ability of the NHS to treat people, if we are actually to minimise mortality, we have got to see this as a long game.”