Bruno Fernandes has hailed the mentality of Harry Maguire after the Manchester United captain bounced back from his midweek horror show to inspire his side to victory at Newcastle. The centre-back was sent off for England against Denmark and there were doubts over whether he should start the match at St James’ Park.

However, Maguire answered his critics and popped up with a fine header to equalise for the Red Devils, following Luke Shaw’s own goal.

Fernandes then saw his penalty saved by Karl Darlow but he did make amends five minutes from time with a fine finish in off the post.

Aaron Wan-Bissaka and Marcus Rashford then added gloss to the scoreline with two further strikes in stoppage time.

The Portuguese was impressed with his side’s mentality and singled out Maguire for praise, after a difficult few months.

“We played really well today. The game was fantastic for us,” he told BBC MOTD.

“Newcastle have a really good team, they play well and have good players but I think we deserved the win today

“H [Harry Maguire] is a big man. He is playing for the national team and Manchester United.

“It is of course difficult for every player being under fire but he did what he had to do on the pitch. He scored. We can push him and he can push us.”

Before tonight’s triumph, Fernandes had scored all 10 of his Manchester United penalties.

Yet here he was denied by Darlow, who was in fine form all evening despite the scoreline, after changing his usual stuttering run up.

Fernandes has since justified his decision to change his approach to the spot-kick and said: “I already change sometimes. Today it doesn’t work.

“I need to do what is better for the game, today was not the right choice but doesn’t matter, miss the penalty I have to keep improving in the next games.”

United now enter a tough run of games which sees them face Paris Saint-Germain, Chelsea, RB Leipzig and Arsenal in the next two weeks. 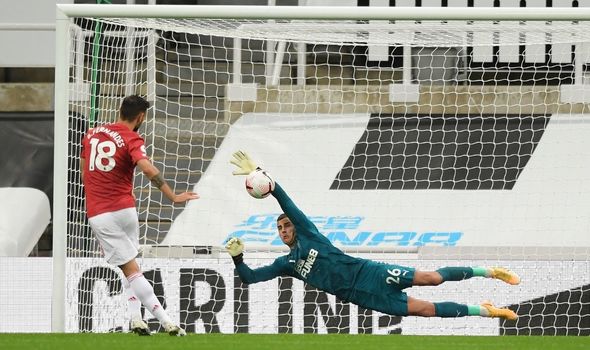 Maguire was cautious to get carried away and suggest that United may not have turned the corner just yet.

He told Sky Sports: “I wouldn’t say we have answered them [the critics]. It’s funny, three games into the season and it seems like a big crisis. Won two lost two. There is a long way to go, we have to improve.

“When you play for this club and get beat at home, we ask questions. We work hard in training, it is a great group and we knew we had to bounce back. I felt it would have been really harsh if we came away with just a point. A full deserved win.

“We knew we needed to get three points and we managed to do so. We’ve got a tough run coming up.

“We are still a young team but we won’t use that as an excuse. It was disappointing to start like we had but big performance tonight when we needed it.”