Bruno Fernandes has already endeared himself to the Manchester United fans since his arrival in January with his scintillating performances but he may have upgraded to cult hero after one gesture to Pep Guardiola during the Manchester derby on Sunday.

Fernandes produced another piece of magic during the first half of the derby with a delicate chip from a free-kick through to Anthony Martial, with the forward finishing past Ederson for the first goal of the game.

City were throwing everything at United for the remainder of the game to try and find a way through but they came up against a resolute defence.

The attacking players of Sergio Aguero, Raheem Sterling, Riyad Mahrez and many more couldn’t find a breakthrough with frustrations clearly boiling over.

United remained resolute with Fernandes continuing to dominate in midfield and it’s clear Guardiola was not happy on the touchline.

And the City boss was involved in a brief exchange with Fernandes on 84 minutes as the United midfielder walked past the touchline.

Guardiola appeared to be talking in the direction of the Portugal international with Fernandes seemingly listening to what was being said.

Then the 25-year-old was spotted bringing his finger on his lips, as if to shush the City boss.

An account on the social media site called @Globesoccer uploaded a photo asked a host of transfer questions including whether or not Sancho would join the Red Devils.

A host of fans spotted the initial like, however, with one writing on Twitter: “Could this mean Sancho is on his way to Old Trafford in the summer?” 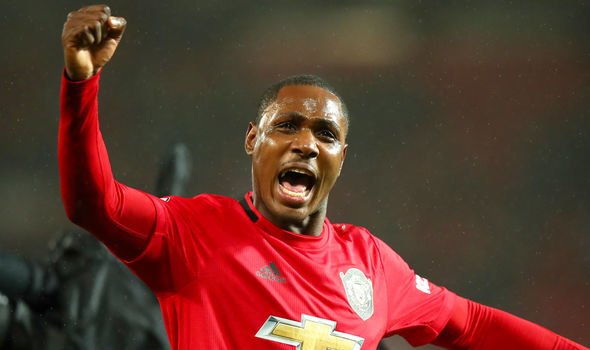 Manchester United ace Odion Ighalo insists he’ll talk about his Old Trafford future at the end of the season.

“It’s too early to talk about the future, now is for me to fight in every game, make sure I give my blood and sweat for the team, try to win games and make sure we end the season well.

“After this season, we’ll see what’s going on. For now, I want to keep working day-by-day, game-to-game, improving and working with these great lads in this team and this great coach who had the confidence to bring me here.