Manchester United hero Robin van Persie has admitted he didn’t like being given a guard of honour by former club Arsenal in 2013. The Dutchman swapped the Emirates for Old Trafford the previous summer and won the Red Devils the Premier League title. But the retired striker has now revealed he didn’t like the occasion.

Speaking to United’s official website, Van Persie reflected on the reception he received at Arsenal after returning to the Emirates as a Premier League champion.

And he said: “I didn’t like it. Some of them were my friends, I spent eight years there and I was just happy that it was over.

“I could see in their faces that they didn’t like it, which I get. And then you see me walking there, I was just happy that it was over.

“I think it’s a nice gesture to do towards the champions, but it just didn’t feel right, not for me and not for Arsenal.

“It was a little bit awkward there, so I didn’t feel really comfortable about that.

“From my point of view, it didn’t need to happen. Okay, it’s part of the rules and, from the basics, I did like it but not that particular day.”

Van Persie also admitted he found United difficult to play against during his time at Arsenal.

And the 36-year-old added: “We always had the feeling that we were in the game, playing well and suddenly we were one or two behind.

“That was with United having fast players like [Cristiano] Ronaldo or Nani. 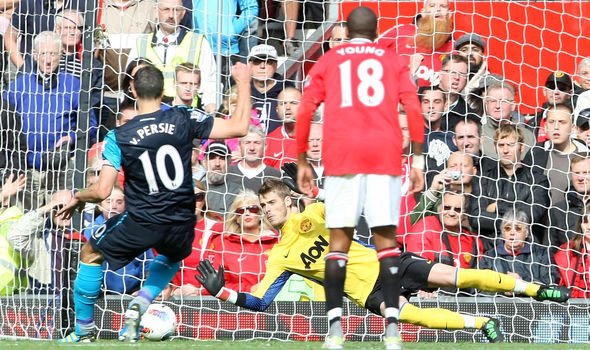 “After the game, we lost 1-0 or 2-0, but we were thinking we are better. That was our view, but most of the time we were losing, from counter-attacks, corner-kicks.

“So we knew where we should improve, but it was just tough against these guys.

“In my later years, I was playing against Rio [Ferdinand] and Jonny [Evans] and Vida [Nemanja Vidic] and John O’Shea was there as well. So all proper defenders. It’s possible that was the difference.

“These guys give everything they have to block a ball or defend a shot or, as a team, to defend corners. It was always very difficult to score against Manchester United.”

Van Persie also labelled the 8-2 defeat to United while at Arsenal as a ‘painful’ experience.

“I think United played really well, but every shot went in. I missed a penalty that game, when it was still close and you think ‘oh no!’

“After that, every single shot went in. It was painful. We couldn’t really compete at that time and to lose 8-2 in the end…

“I think I did nick one goal, so it was good for the stats in the end, but it was a tough day at the office. After the game, everyone was down obviously.”