Manchester United fans have been left angered and bemused as to why Tottenham star Erik Lamela also wasn’t shown a red card when Anthony Martial was sent off in the first half of Sunday’s clash. The crunch match got off to a pulsating start when Davinson Sanchez gave away a penalty in the first minute.

United were punished for some poor defending with Harry Maguire making a hash of his attempted clearance in the box.

The ball then falls to Tanguy Ndombele who smashes his effort past David de Gea.

And Spurs quickly bagged their second through some individual brilliance from Heung-min Son.

The frantic action didn’t stop there though as Martial was shown a red card for an incident inside the penalty box for a Tottenham corner.

Replays showed Martial had raised his hands to Lamela’s face and, while minimal contact was made, the Tottenham star hit the deck.

VAR stuck with the official’s decision to give Martial his marching orders.

But some United fans were left questioning why Lamela also wasn’t shown a red card as well after he appeared to initiate the coming together with an elbow to Martial’s face.

One fan fumed: “FA either need to rescind the red card for Anthony Martial or give Eric Lamela a ban too.”

Another wrote: “How is Lamela still on the pitch? This VAR is useless.”

A third said: “Where is the #VAR? Disgraceful decision.”

A fourth tweeted: “How with VAR does Lamela get away with that but Martial doesn’t?” 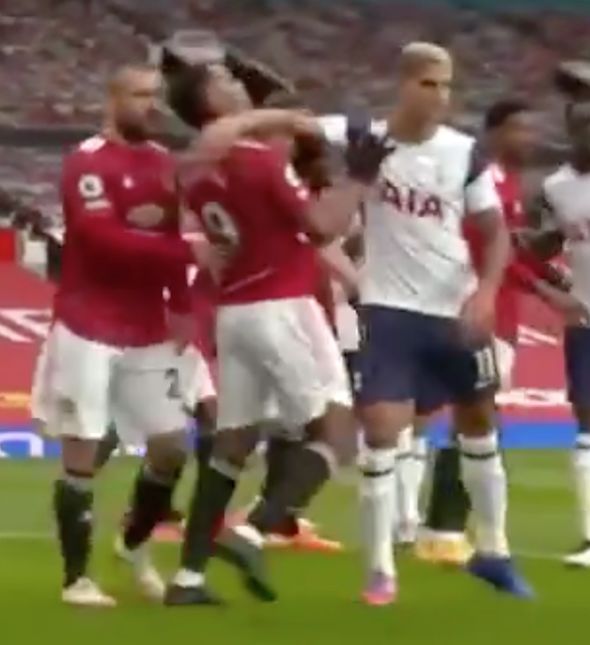 Another angrily wrote: “What’s the point in VAR if Lamela is not sent off?”

Son then all-but sealed all three points for Jose Mourinho’s side with his second of the game before the break.