Manchester United coaching staff reportedly think Bruno Fernandes is developing an understanding with Anthony Martial. Fernandes has been in fine form since his move from Sporting Lisbon, scoring twice and managing three assists from just five matches so far.

Manchester United signed Fernandes in the January transfer window at a time where the club were stuck in a rut.

But, since the arrival of the Portugal international, the Red Devils have been sensational.

United have seen Fernandes immediately establish himself as an Old Trafford hero, shining in two matches against Club Brugge as well as showdowns with Wolves, Chelsea and Watford.

And the Metro say that United coaching staff have noted him striking up a good understanding with Martial on the training ground.

A month ago and Martial was under pressure for inconsistent displays.

He struggled in Fernandes’ first game, a goalless draw with Wolves, and many were critical of the France international.

But Martial has impressed in recent weeks, rediscovering his best form to drive the Red Devils to greater heights.

And United are now hopeful the duo can propel them back into the Champions League this season.

Fernandes is set to start against Everton today (2pm) as the Red Devils look to move to within just a point of fourth-placed Chelsea.

But, speaking before the game, Solskjaer admitted that he was unsure if Martial would return from injury in time. 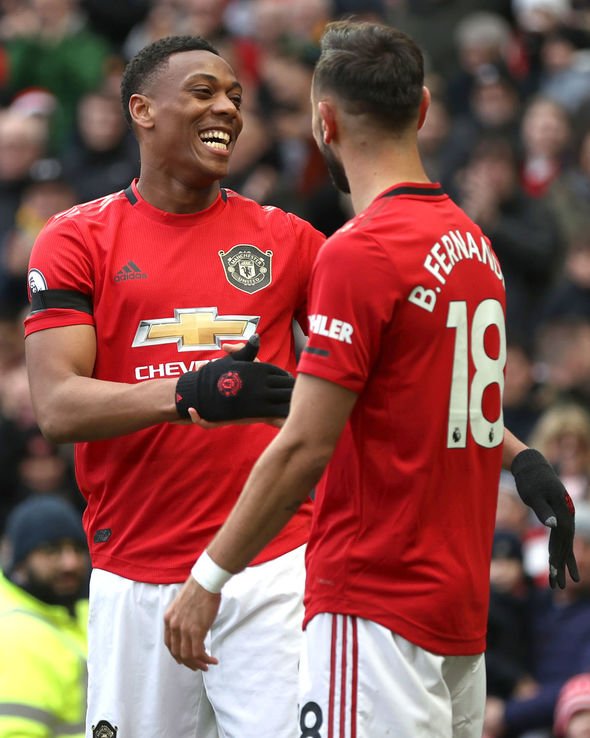 “No we don’t know yet,” he said when quizzed on the France international.

“We have to try, we hope, to get a fitness test done before the game. Odion [Ighalo] did really well in his place so we’re well-equipped.”

Meanwhile, United legend Paul Scholes has hailed Fernandes and expressed a belief that he can become a club great.

“He looks a special talent, he looks like he can be a hero with the fans as well,” Scholes said.

“He’s got the right name for it with the song and stuff.

“You think of your Cantonas, your Wayne Rooneys, these people who are idolised by the fans, you hope that in future he can become a player just as good as them.”

He added: “You think of all the great teams here [at Old Trafford], when you think of Cantona playing in that No. 10 role, just making the team play.

“Teddy Sheringham then doing it, Dwight Yorke to a certain degree.

“I think all these great teams, they have a great link between midfield and attack.”