Premier League football has been postponed until April 3 at the very earliest so Manchester United boss Ole Gunnar Solskjaer wants to use the break to work on tactics with Paul Pogba. The midfielder is expected to be utilised in a different way than before because of the arrival of Bruno Fernandes.

United signed Fernandes for £47million in January and the Portugal international has made an instant impact.

The Red Devils enjoyed an 11-match unbeaten run prior to enforced break.

But the suspension of matches allows Pogba, who underwent ankle surgery earlier this year, to return to full fitness.

The Frenchman’s future is up in the air because he has only made eight appearances all season.

Pogba attempted to push through a move to Real Madrid last summer and he is expected to likewise again this year.

But the delay in the season could see him remain at Old Trafford for at least another year.

And the Athletic claim Solskajer has already started working on tactics with the 27-year-old in a bid to partner him with Fernandes in the centre of midfield.

Pogba has failed to reach his full potential since returning to United for £89million in 2016.

But lining up alongside Fernandes could be the key to Solskjaer’s side returning to their former heights.

The Norwegian boss last week admitted he was keen in keeping Pogba beyond his current contract, which expires next summer.

“He could well re-sign,” he said. “Watching the win over Manchester City and you can see where the team is going.”

The Athletic add that Pogba has also been working with United coach Michael Carrick in an attempt to get back up to speed. 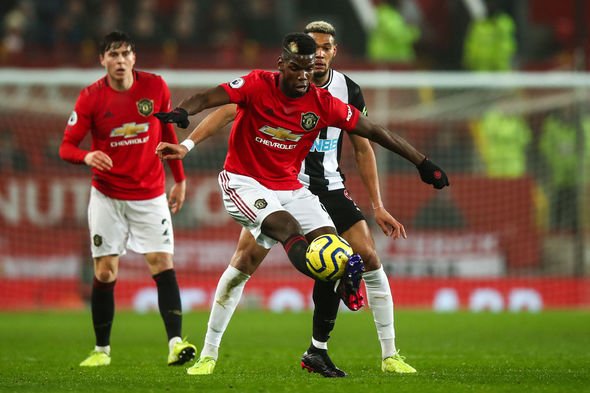 In the unlikely event that football resumes next month the former Juventus star wants to impress in the final matches to earn a place in France’s Euro 2020 side.

United are facing a difficult battle to break into the Champions League places and they are also hoping to progress in the Europa League.

A successful finish to the campaign will also be a great advert for any potential suitors, if Pogba wanted to leave when the transfer window reopens.