Ole Gunnar Solskjaer has warned Manchester City there will be no let up from his side in their bid to apply pressure in the Premier League title race following Manchester United’s 3-1 win over Newcastle at Old Trafford.

After managing one victory in their previous five top-flight matches, Solskjaer felt Thursday’s 4-0 Europa League victory against Real Sociedad showed his side had got over their recent slump and United got back to winning ways domestically after seeing off the threat of relegation-threatened Newcastle.

While they fell short of those standards on Sunday, second-half goals from Daniel James and Bruno Fernandes goals secured victory after Allan Saint-Maximin had cancelled out Marcus Rashford’s fine opener – and Solskjaer refused to rule out catching their neighbours at the summit despite City’s 10-point advantage.

“I am never going to say it’s done until it’s done,” he said. “We have seen so many examples of teams that have hung in there, have kept working and have kept doing their own jobs. Something might happen. It’s not something we think about – we just think about our own performances.

“To build momentum by going on the pitch and playing well is important. We have had a couple of setbacks in West Brom and Sheffield United where I can sit here and explain why we did not get the points we deserved but that’s not what I want to do. For me, the boys are really focused.

“We have been good at recovering mentally and physically. It’s not easy playing Thursday night and coming back here. Maybe that’s why we needed 45 minutes to get going.”

Since losing three of their opening six games of the Premier League season, United have only lost one of their last 19 games in the competition and Solskjaer praised James for battling back into the starting XI.

“It’s been a very good week for him,” Solskjaer added. “He’s been working hard and there’s a couple of games we have targeted for his X-Factor. He gives us the energy defensively. I am delighted for him to get his goal and he’s ready to go again.

“He never disappeared. He has been working hard behind the scenes and always been available. He is always a player you can use in different areas with his pace.

“We work with him, we try to help everyone but of course Dan came from the Championship, he hit a few goals in the first games and it is bound to take some energy from you. He has knuckled down and really worked to get back to full fitness but maybe more so confidence, to believe in himself.” 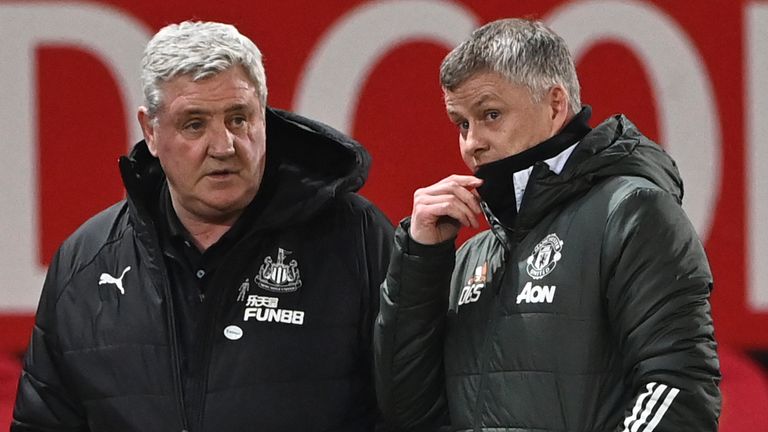 The result extended an unwanted record for Newcastle, who have lost each of their last 21 away games against opponents starting the day in the top three of the Premier League table, in a run dating back to February 2012.

Bruce said: “The first goal I’m sure we can defend better and for the second there’s a deflection that takes it into the path of James. We’re deflated but we can take a lot of positives. Allan had a good chance and I’m pleased with elements of our game. 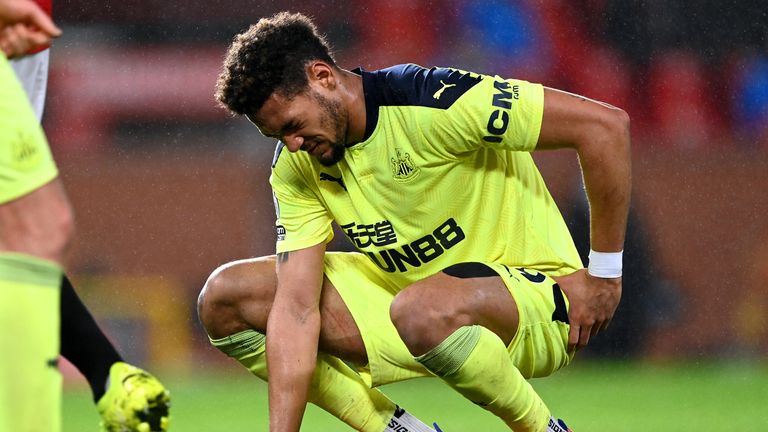 “There are six or seven teams in and around the relegation zone with 13 games or so to go. We’re one of them but I’m quietly confident that we’ll be fine. We stayed in the game for an hour and a big turning point for us was the loss of big Joe [Joelinton]. We hope it’s not too serious. It’s a groin or a hip problem but he’s not quite so sure yet.

“The fans don’t want to see their team at the wrong end of the table and I understand that totally. We’ve got a unique fanbase who make us the club we are, but I’m still confident that we’ll be fine.

“Allan (Saint-Maximin) for me is physically still not right having been out for four months while [Miguel] Almiron was exhausted after the work he put in. I was worried for the pair of them physically and the last thing we need at the moment is another injury to either one of those two.

“It’s gloomy, but I was pleased with the performance tonight, especially in the first hour. We’ve just got to start turning those performances now into results.”

Related posts:
Previous Post: Chelsea do have important advantage over Atletico despite Southampton draw
Next Post: Inside Everton’s Saturday morning meeting that was key to ending Anfield hoodoo