Manchester United fans hoping to see the best of transfer target Jadon Sancho at Euro 2020 will have been left feeling disappointed by the lack of action handed to the Borussia Dortmund star. The 21-year-old managed five minutes from off the bench in during the Three Lions’ 1-0 win over Czech Republic on Tuesday evening, though has otherwise remained unused by Gareth Southgate so far at the tournament.

After another impressive individual campaign in Germany, many supporters had expected to see Sancho in action at the Euros. But that has not been the case so far.

Blessed with attacking options in the final third, Southgate has opted for Mason Mount, Raheem Sterling and Phil Foden as his main three midfield options amid strong competition for places.

Quizzed on his reasoning for Sancho’s lack of involvement at the tournament, the England boss told reporters:

“We’ve got some explosive options and a lot of them are young players and experiencing a big tournament for the first time.

“So as a coaching staff we are realistic about our expectations of them as individuals.

“Jadon is in that mix. He’s trained well the last few days and of course we have got those options and those decisions to make.”

Roy Keane has also offered his take on the situation, as he attempted to explain the omission of the England youngster.

“We all follow the players what they’re doing every week for their clubs but Gareth has had three or four weeks with the players,” Keane said on ITV.

“He’ll look at players’ attitude to training, particularly players that have been left out, and this is certainly a talented kid.

“What England missed the other night was extra energy and pace, people going past players and this kid will bring that.”

While Sancho not being a go-to option may be bad news for England supporters who have heard all about his goalscoring exploits in the Bundesliga, it may act as a bonus for Manchester United. 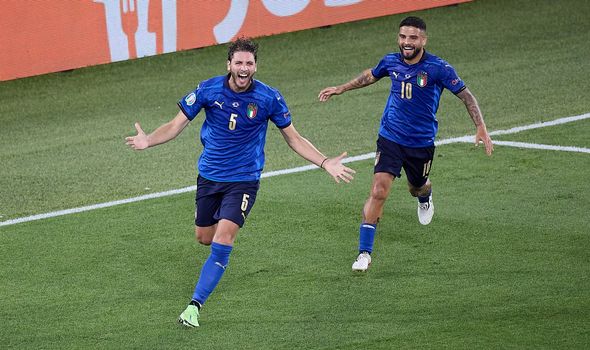 The Red Devils remain in talks with Dortmund over a summer transfer and are understood to have agreed personal terms with the 21-year-old.

United and Dortmund were unable to agree on a fee last year as the German side continued to demand in excess of £100m for the former Manchester City academy star, but have lowered their asking price on this occasion.

It’s understood £78m would be enough to secure a deal for Sancho this time around, with a fall in value relating to the financial damage caused by the coronavirus pandemic.

Had Sancho been putting in man-of-the-match displays for England at Euro 2020, it’s highly likely that Dortmund may have reconsidered their asking price.

You only have to look as far as Italy’s Manuel Locatelli or Denzel Dumfries of the Netherlands to see what strong performances at Euro 2020 can do for a player’s transfer value, with both stars in demand this summer and expected to sell for more than their expected rate.

International competitions often act as the perfect platform for players to earn big-money moves and demonstrate to potential buyers just what they have to offer. In Sancho’s case, United are already aware of what qualities he possesses and will not want his valuation raised any higher.

There could still be an opportunity for the London-born forward to shine at Euro 2020, though Manchester United may prefer if he continues to play a supporting role in the side.