Big transfer news recently broke from the Etihad suggesting that Manchester City are closing in on a £100million move for Jack Grealish. Rather than put an end to their even pricier pursuit of Harry Kane, reports claim that Guardiola still wants to bring in the Spurs striker.

With City seemingly not put off by Aston Villa’s £100m valuation of Grealish, it appears as though the tricky 25-year-old could indeed be heading north.

Some reports indicate that a deal has already been agreed between the two clubs, with official announcements to come after the conclusion of England’s involvement in Euro 2020.

With a momentous last 16 clash with Germany on the horizon, those announcements could arrive sooner than expected.

Grealish struggled to make an impact off the bench in the opening games of this summer’s tournament, but his talent was on full display as he chipped to the far post for an impressive assist against Czech Republic.

Reports from elsewhere indicate that Villa have now re-opened talks with their academy graduate in a desperate attempt to keep hold of the player who has been at the club for 20 years.

Earlier in the summer, Villa successfully signed Emi Buendia and had a bid rejected for Emile Smith-Rowe which suggests they were already preparing for life without their talisman.

When it comes to Kane, Guardiola is unquestionably still an admirer of the player and the Daily Mail say he remains a target even if Grealish joins.

However, Daniel Levy’s £150m valuation of the 27-year-old could prove a bridge too far, particularly if Grealish is successfully brought in.

The England captain recently told Spurs that he wants to leave the club in search of silverware.

Kane would likely be a perfect fit for City’s front-line, with Guardiola deploying a central attacker who likes to drop deep for most of last season.

With £250m worth of investments out on the table, some significant outgoings from City would surely be required if the pair were to arrive at the Etihad.

Raheem Sterling and Gabriel Jesus are just two examples of players linked with moves away.

The England winger even hinted in a post-match interview with England that he was not enjoying his football last season. 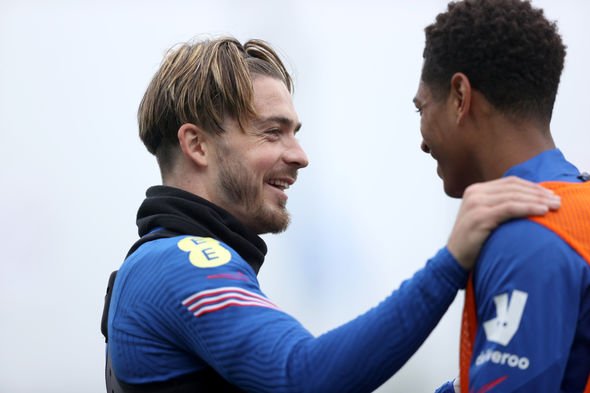 Although City romped to another Premier League title last campaign, a re-shuffle seems to be on the cards in order to get the all-important Champions League triumph over the line.

Chelsea pipped them to it in May’s final, but with Grealish and Kane in their side, who knows what kind of damage they would be capable of.