As their pursuit of Marc Cucurella stalls, Manchester City may turn their attention to other left-back targets and could reignite their interest in Borussia Dortmund star Raphael Guerreiro. However, the price tag attached to the Portugal international could pose an issue.

After the departure of Oleksandr Zinchenko, signing a left-back has become a priority at the Etihad Stadium. Pep Guardiola has insisted that he is content with his current options, but their pursuit of Brighton defender Cucurella suggests otherwise.

The Seagulls have reportedly rejected two bids from City for the Spanish fullback, standing firm on their £50million valuation of the 24-year-old – despite the player handing in a transfer request. The Athletic report that City are only willing to spend £40m on Cucurella, and may turn their attention back to Dortmund’s Guerreiro, a previous target.

However, they could encounter a familiar issue of price tags when trying to negotiate with the Bundesliga side. Guerreiro is not expected to be ‘let go at a feasible price’, which could mean that his price tag is out of reach or not in the realms of what City are keen to spend this summer.

JUST IN: What Xavi told Chelsea’s Cesar Azpilicueta and Marcos Alonso as Tuchel holds transfer up

Guerreiro scored four and assisted two for Dortmund in 23 league appearances, and his attacking output could mean that he slips seamlessly into City’s system. Guardiola is often fond of a fullback that can step inside to create centrally or press on and outnumber defences in the final third, so the 28-year-old’s desire to press on will be attractive to the former Bayern Munich boss.

But he will know that it is not simple to prize top players away from clubs, as learned this summer with Brighton. Graham Potter’s side have reportedly told City not to try and re-negotiate with the club unless they are offering a fee of £50m above – similar to how they stood firm with that price tag when Arsenal came knocking for Ben White last summer. 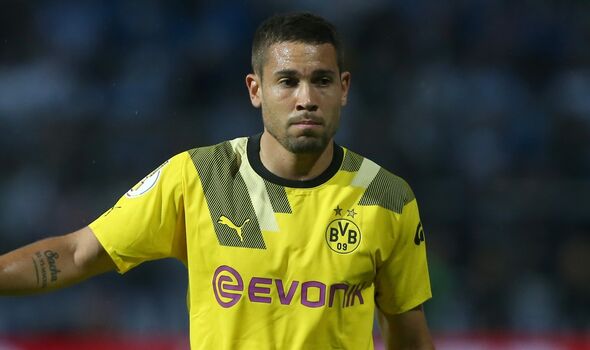 Asked about the significance of Cucurella submitting a transfer request earlier this week, Guardiola refused to entertain the question, saying: “He is a Brighton player. I cannot say anything else.

He was then asked about how important it was for City to sign a left-back and if it was a priority, to which he replied: “If it is possible, yes. If not, we stay with what we have. We have enough players who can play there. Joao can play there, Josh [Wilson-Esbrand], Nathan [Ake] can play there.”