Manchester City head to Old Trafford this weekend for the Manchester derby against Manchester United. Pep Guardiola has admitted that he has a lot of respect for Sunday’s opposition, and that Ole Gunnar Solskjaer is building something at the club.

City lost the reverse fixture 2-1 at the Etihad Stadium, after two first-half goals from Marcus Rashford and Anthony Martial.

While the Citizens head into the tie in good form, their cross-city rivals are also drawing plaudits.

The Red Devils are unbeaten in all competitions since their 2-0 home defeat to Burnley, at the end of January.

Guardiola has backed Solskjaer to continue his project in west Manchester, and he admitted that they’re still a strong team.

“From what I saw, in videos and in games, the players follow him, absolutely,” said the City manager.

“The commitment they have… and it’s getting better. Maybe it’s the best moment in the season for them.

“Always I believe that Man United is a strong team and they’re playing good.

“With the game at home, which we lost, they played a good 25/30 minutes, and I always have a lot of respect and a good opinion of Man United.”

Guardiola is expecting a tough match against United on Sunday, and has warned his players that Solskjaer is likely to set up his team in an aggressive manner.

United were criticised under their former manager, Jose Mourinho, for setting up too defensively, and aiming to avoid defeat rather than trying to win games.

But, Solskjaer has changed the philosophy at the club, according to Guardiola.

While they may go through periods of sitting back in the upcoming Manchester derby, their overall style is about scoring goals. 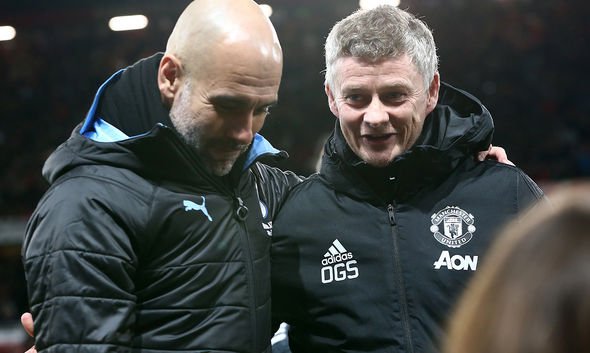 “When I saw the last game, they were incredibly aggressive,” he said. “I think in Old Trafford, that’s going to happen.

“Yeah, in some games they defend, but what I saw in the last games – like against Derby County and in the league – it’s a team that’s aggressive.

“At Goodison Park, for example, they played a good game.”

City look certain to finish inside the Premier League’s top four this season, as they have a 15-point cushion over fifth-placed United.

But, the Red Devils are still desperate to break into the Champions League qualification places.

Solskjaer’s side have lost the last three home matches against City in all competitions.

In most cases, the away side usually comes out on top in Manchester derbies.

Only on one occasion in the past seven derbies has the home side won the tie.