Benfica Under 19s 4-1 Liverpool Under 19s: Young Reds dumped out of UEFA Youth League at the last-16 stage and finish game with NINE MEN

Liverpool Under 19s crashed out of the UEFA Youth League on Tuesday, losing 4-1 away to Benfica at the last-16 stage.

On a chastening afternoon for the youngsters, Liverpool concluded the game with nine men, as van den Berg and Leighton Clarkson were both sent off in the final 20 minutes. 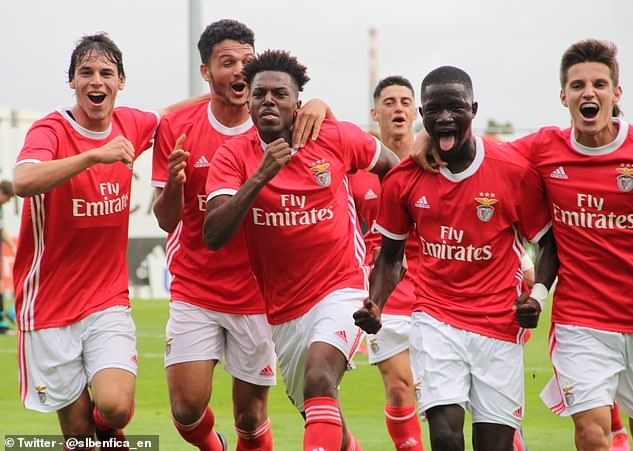 Benfica striker Goncalo Ramos scored the opener after 13 minutes, before a penalty from Tiago Dantas put the hosts two up at the Benfica campus.

A third was added by Nuno Tavares and although Liverpool’s Tyler Morton scored a sublime goal seven minutes before half-time, Ramos’ second of the game on 59 minutes restored Benfica’s three-goal advantage.

Centre back van den Berg was sent off for bringing down Dantas with 18 minutes remaining, while Clarkson kicked out at Rafael Brito in stoppage-time as the Reds finished with nine men.

The result means Benfica progress to the quarter-finals, while a Liverpool side coached by Barry Lewtas will now focus on the their remaining games in the Under 18 Premier League North division.