Andy Robertson says Liverpool are determined to lay down a marker when they take on Arsenal on Wednesday. On Saturday, Liverpool drew their first home game of the season when they were held 1-1 by Burnley.

The Premier League champions thought they should have had a penalty in the second half when Robertson was brought down by Johann Berg Gudmundsson.

Robertson fumed at the referee David Coote and VAR after the final whistle and is keen to take his frustrations out on an Arsenal team reeling from losing the north London derby to Spurs.

The Gunners are ninth in the table and need a win to keep up their faint hopes of playing in Europe next season.

Arsenal go into the game without a win against Liverpool since April 2015.

While Liverpool need to win their final three games to beat Manchester City’s record of 100 points.

And Robertson says Liverpool are keen to deliver a statement performance against Arsenal.

“Not getting a result in the derby is always tough, you always feel it a wee bit more and they will certainly feel that with Tottenham coming from behind and getting the win and taking over them in the table and stuff, so they will be looking to bounce back,” Robertson told Liverpoolfc.com.

“But obviously we’ll be looking to stamp our authority on the game. 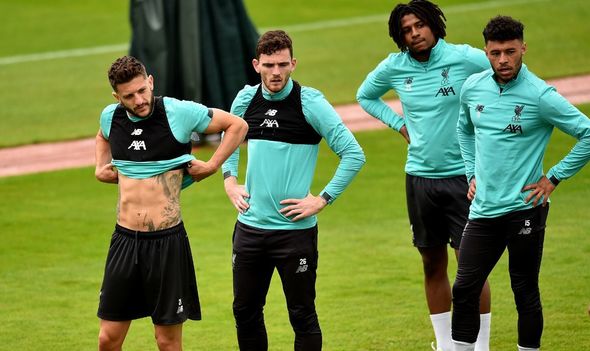 “We want to go there and show why we are champions and put on a good performance and get the win that we want as well, and that we need.

“So, we are looking forward to a tough game. Obviously they are fighting for European football so they have a lot to play for, but the desire to win the game will be there for both teams and it’s about who comes out on top. Hopefully it will be us.

“Hopefully our quality shines through and we can get the three points that we want and we need, and then we move on to the Chelsea game.

“The last three games that we’ve got are really tough ones and we look forward to the challenge of all three of them and hopefully we can get maximum points.

“It’s all about us trying to carry the momentum into next season now.

“I think everyone knows we don’t have a long break between the two seasons so it’s important to try to keep that winning mentality going and taking that into next season.”