Liverpool may not need to bring in any new attacking options in the summer as Noel Whelan believes they already have a future superstar in their ranks who could become the next Wayne Rooney or David Beckham. Premier League clubs will likely have to alter their transfer plans for this summer’s transfer window due to the financial implications the coronavirus pandemic has caused in football.

Timo Werner has been hotly tipped to complete a move to Anfield, but his price-tag of £52million may prove to be too costly in the current climate.

Instead, loan or swap deals have been reported as the most likely scenario while free agents will also be a hot commodity.

When clubs can actually sign players is still to be decided as well with the transfer window expected to be pushed back with the current season suspended.

For Liverpool though, they’re focus will be on building on what has been an incredible campaign under Jurgen Klopp.

Jurgen Klopp has helped lead his side to the top of the Premier League, with just six points needed for Liverpool’s first top-flight title in 30 years.

They have been tipped to build a dynasty in years to come, but they will have Manchester City, Manchester United, Chelsea, Arsenal and Tottenham doing everything they can to stop Liverpool’s run.

Klopp will likely need to utilise his squad depth even more next season with Naby Keita, Mohamed Salah and Sadio Mane potentially missing a month of the campaign due to the 2021 Africa Cup of Nations.

Divock Origi has been the usual fourth option to slot into one of the three front positions, but Whelan believes 17-year-old Harvey Elliott has all the capabilities to step up to the first team and make an impact.

Liverpool delay Anfield expansion due to coronavirus as plan revealed

The Reds signed Elliott from Fulham last summer and he became the youngest-ever player to start a match for the club when he played against MK Dons in the EFL Cup tie back in September.

And Whelan believes being able to learn from the likes of Salah and Mane will help mould Elliott into the “next Beckham or Rooney”.

“There is not many better 17-year-olds out there,” he told Football Insider.

“They realised this when they signed him. 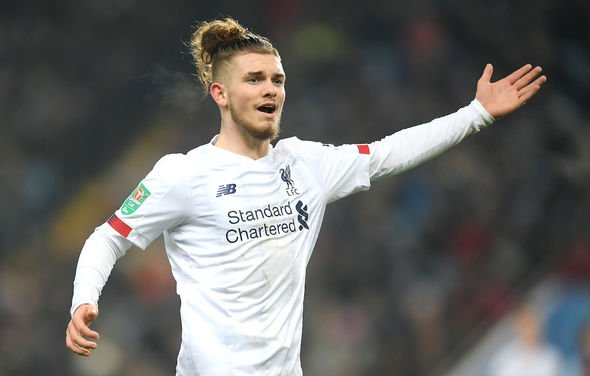 “We watched him in the FA Cup games and he is a real talent. He has a bright future ahead.

“When he has got that you have to reward these players. You have to keep them there and nurture them.

“He is going to be training with Mane, Salah, Firimno Origi – all of these wide players. He is learning from the best.

“They can only turn a player with this kid’s ability into a future star and that is what Liverpool are hoping.

“We always need players like that for England, especially with the talent he has at such a young age.

“Could he be the next Beckham or Rooney?”