Liverpool hero Steven Gerrard has praised Jordan Henderson for his performances this season and has compared him to Manchester United legend Paul Scholes. That has not gone down well with fans of the Red Devils.

Henderson has featured in all but four of Liverpool’s top flight matches this campaign, helping them to a 25-point lead over closest rivals Manchester City.

The 29-year-old has impressed throughout and many believe he should be named the PFA Player of the Season if the Premier League is eventually finished.

Henderson was also instrumental in setting up the Players Together initiative to help the NHS through the coronavirus crisis.

“It’s no surprise to me how he is handling himself on and off the pitch, obviously I played with him for numerous years for Liverpool and England,” Gerrard told BT Sport.

“Very fit, athletic boy who is very selfless in how he approaches his play on the pitch.

“He puts everyone else before himself and when you play alongside him you appreciate the job he does for the team.

“I think over the years he has developed parts of his game, his passing range is fantastic and he’s running games with control a bit like Paul Scholes used to do it.

“He’s leading by example and he is always there for the team.”

United fans did not agree with Gerrard’s analysis though and believes Henderson is way off Scholes.

One said: “Has Gerrard really just compared Henderson to Scholes.”

Another added: “Like Paul Scholes, but completely different. And worse.”

“Don’t even say Paul Scholes name in the same sentence as Henderson,” another explained.

And a fourth exclaimed: “Seriously did I hear a man who is meant to know something about football try and compare scholes and Henderson.

“There is so many levels between the 2 of them its unreal. Scholes was a elite player. Henderson will never ever be elite.” 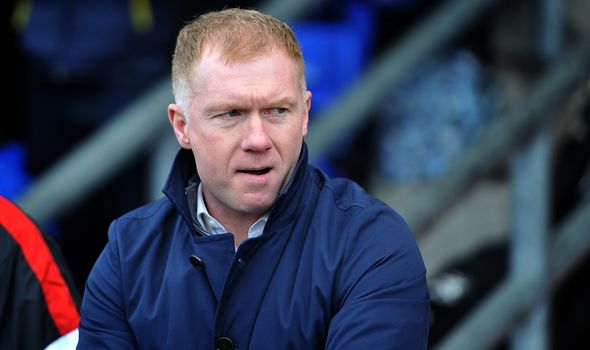 Henderson has netted three times and provided five assists in the Premier League this season.

That has left Liverpool just six points away from sealing their first title since 1990.

Meanwhile, Jurgen Klopp believes his Liverpool side are not the finished article yet.

“We will not change [mentality], that’s the first thing,” he said on Sky Sports.

“If we will be successful depends what other clubs are doing as well because they all have a chance to improve things, to do things better.

“So I have no clue what the future will hold for us. But we will not change, this team is not a finished article, it’s not done.

“We have a lot of space for improvement and we work on that.

“We have fresh blood coming up internally, we can mix things through.