Liverpool boss Jurgen Klopp and assistant Pep Ljinders knew they had a star on their hands in Harvey Elliott after just one training session. The 17-year-old has already made a big impact on Merseyside after making the switch from Fulham last summer.

Klopp has been so impressed with Elliott that he gave him his first Premier League appearance for the Reds in January against Sheffield United.

That’s after he caught the eye for the Reds in the Carabao Cup and FA Cup, showcasing his nimble footwork and trickery.

Ljinders has been keeping a watchful eye on Elliott and his development since moving north from London, and the Dutchman has also praised his character as well as ability.

He said to Elliott ahead of an interview with the youngster for Liverpool’s website: “So, this is a quick interview with our ‘little diamond’ of the team, Harvey Elliott.

JUST IN: Liverpool boss Jurgen Klopp could be about to sign his very own Luis Suarez

“I am looking forward to it and I will try to get more to know about him and to show what a good kid he is.

“He is a great player, which everybody sees, but behind that is a great human being – and a great addition to our team and our squad. So, let’s start!”

Elliott then revealed that his first training session with the first team was a huge reality check.

“Obviously the full squad wasn’t there, but stepping through the doors and seeing all the lockers was a real moment for me,” he said.

“Then onto the pitch and the tempo of training and the quality of the players… I was like, ‘Wow!’”

Ljinders was keen to boost Elliott’s confidence, by revealing the thoughts of the Liverpool boss.

“You speak about your first session,” Ljinders said.

“I remember coming back into Melwood and me and Jurgen were sitting and both said, ‘OK… that’s quite impressive for a 16-year-old!’. 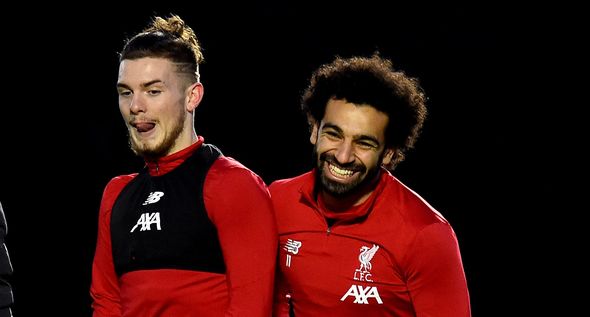 “Normally when we do the counter-press rondo we did that day, you see straight away if a player can handle the speed and decision-making because it’s such a short space you play our game in.”

Liverpool do not want to rush Elliott into the first-team picture and will ease him through their youth academy.

They are confident that he has a huge future at Anfield and can play a big part of their success.

Elliott is set to sign his first professional contract this summer, with Liverpool tabling a three-year deal.