Jurgen Klopp has hinted that Diogo Jota may have to be patient before he gets his chance at Liverpool. The £41million man was named on the bench at Lincoln but Klopp confirmed that was always the plan for his new signing.

Sporting director Michael Edwards moved quickly to get the deal over the line following an initial approach last Friday, after wrapping up the signing of Thiago Alcantara.

Klopp has been keen on adding attacking reinforcements to his ranks since the start of the transfer window, when the club were forced to pull out of the running for Timo Werner.

In Jota, Liverpool have acquired a player who is proven in the Premier League and can play anywhere across the frontline.

Given that the likes of Mohamed Salah, Sadio Mane and Roberto Firmino were inevitably going to be rested for the trip to Sincil Bank Stadium, Jota may have fancied his chances of a start.

JUST IN: Liverpool transfer for Nabil Fekir did not collapse due to medical as new twist emerges

Similarly to first team regulars Andy Robertson and Fabinho following their arrivals on Merseyside, it now seems Jota may have to bide his time to get his chance at Anfield.

Klopp told Sky Sports before kick off: “I think it makes sense that he just watches our game a little bit from the side and from the television.

“He will come on 100 per cent, that’s clear. I could have started him but I really want him to settle in.

“I want him to listen to the things we said in the three of four training sessions. That’s the reason, no other.”

It’s a procedure that Klopp has followed with a number of his major signings as he takes his time to embed them into his side.

Fabinho did not make his first Premier League start until November 2018 after joining the club that May.

Following his arrival from Hull for £8million, Robertson took four months to get his chance ahead of Alberto Moreno after the Spaniard sustained an injury.

He did not look back and eventually forced Moreno out the door. 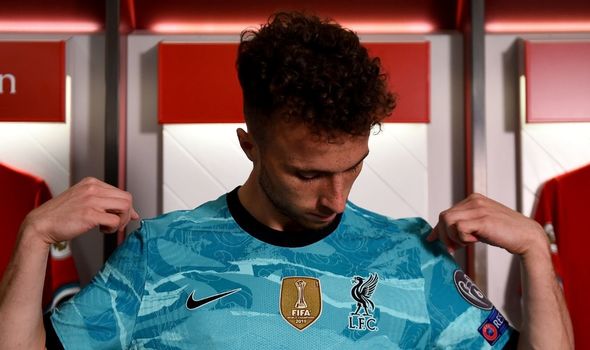 Liverpool’s assistant Pepijn Lijnders has made it clear that the Reds have not signed Jota to make up the numbers.

“Diogo, his technical level is the same as our front three,” Ljinders said, per Sky Sports.

“He has future in his feet. He will have a great pathway inside our club. He is like a pressing monster so he will fit in straight away.”

Jota will have to oust Xherdan Shaqiri and Divock Origi for opportunities and the Swiss international reminded Klopp of his quality with a stunning first half free-kick.