England have won the Women’s Euro 2022 final at Wembley 2-1 in extra time – the first major trophy for any England football team since the 1966 World Cup.

Substitute Ella Toone scored early in the second half for England with a chip over the German keeper Merle Frohms’ head. That goal was cancelled out by Lina Magull in the 79th minute.

Chloe Kelly pulled England ahead inside the last 10 minutes of extra time to put them on the brink of a historic win.

Germany had suffered a major blow just ahead of kickoff when striker and captain Alexandra Popp was injured in the warm-up.

Popp, who had scored six goals in five games in her debut Euros leading up to the final, was withdrawn from the line-up moments before kickoff due to “muscular problems”.

A record crowd of 87,192 were in attendance, beating the highest total recorded in either the men’s or women’s editions of the tournament. 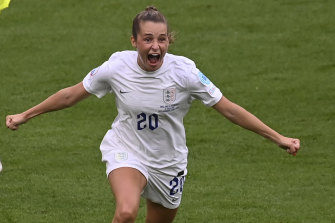