When two courses of history collide, something has to give. It was the case in more ways than one in Rio for the 2021 Copa America final, and ultimately Argentina triumphed.

Their single-goal victory over Brazil at the Maracana was notable for all the usual reasons, and a few more besides.

On the basic level, it was a first major tournament honour for the Albiceleste since 1993, an incredible trophyless run for one of the most storied international teams in the game’s history. In more poignant fashion, Argentina have won their very first tournament played after the death of their all-time greatest hero, Diego Armando Maradona, who passed away last November.

Somewhere in between the two came the relief, the joy, the passionate celebrations and tears of happiness of Lionel Messi, perhaps the greatest player of all time and the national team captain – who finally got to add a major international medal to his personal collection.

Bizarrely or not, his lack of trophies at international level had often been used to suggest he couldn’t be termed the greatest ever in the eyes of some. That argument is now at an end. It was also held over him as some sort of ‘proof’ that, in the ever-lasting battle for modern supremacy between he and Cristiano Ronaldo, the Portuguese Euro 2016 winner had the edge. That argument is also now at an end. 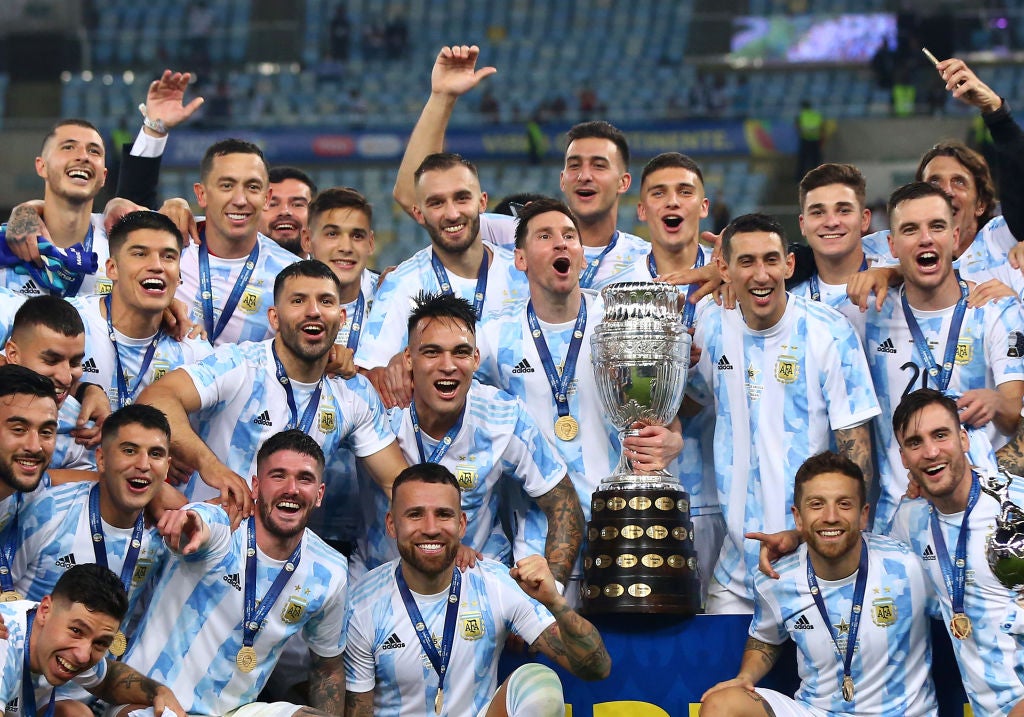 And, instead, perhaps someone new feels the keen sting of expectation and raised eyebrows at the bare shelf of the trophy cabinet fall his way: Neymar.

Once seen as the heir apparent to the other two greats and a Ballon d’Or certainty of the future, Neymar has failed to quite live up to the absurd standards set by Cristiano and Leo – in durability and availability, as much as with their strike rates.

The club trophies have come with frequency, but on the international stage Neymar – now aged 29 – remains short.

Like Messi, he has an Olympic gold medal to his name. And where Messi had an U20 World Cup victory as an early taster, Neymar helped Brazil win the Confederations Cup in 2013. Neither are major tournaments. Neither register on the scale when it comes to arguments and metrics of who lies where in the pantheon of the greats.

While Brazil won the Copa America last time out in 2019, Neymar was not part of the squad, injury keeping him sidelined. Quarter-finals, injuries and self-inflicted suspensions have otherwise prevented him leading the Selecao to glory in any competition of note.

Here was his chance, but so too was it Messi’s – whose time is closer to running out, and thus to whom it mattered perhaps that little bit more. On the back of three runners-up finishes at the Copa and another at the World Cup, it could hardly be claimed the Argentinian No10 has done it the easy way.

Argentina were 19 games unbeaten heading into the final, yet such good runs in recent history pale into comparison against the weight of real history: Brazil as hosts had never lost in the Copa against their great rivals and it was 1975 last time they lost on home soil in the competition against anyone at all. 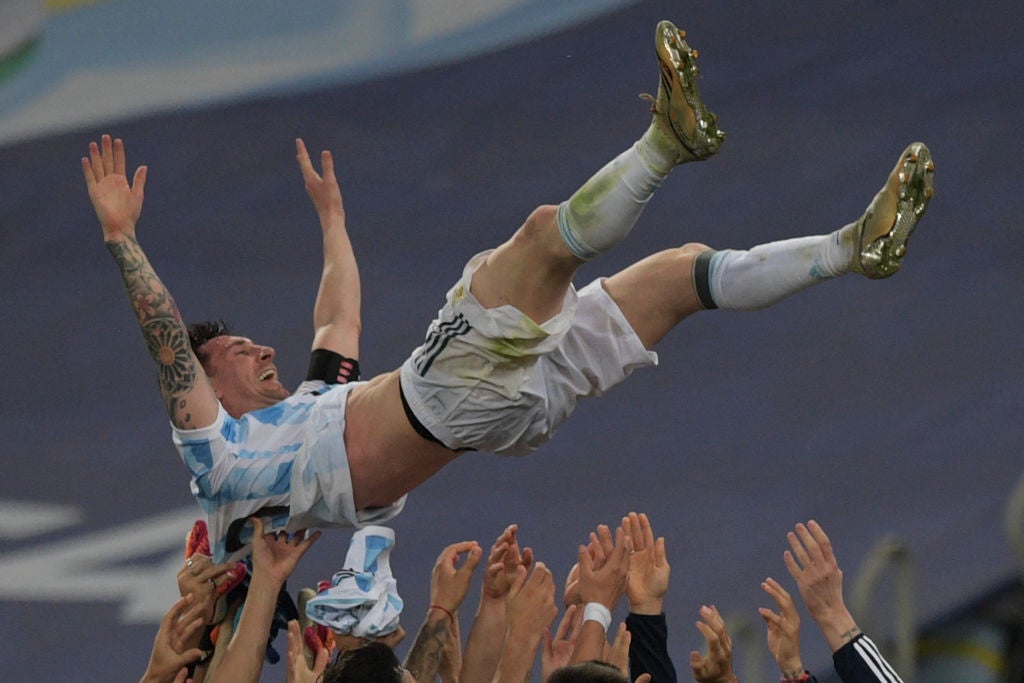 Everything had to go right for them to end those significant runs and, thanks to Renan Lodi’s miscalculation, Angel Di Maria’s composure and Lionel Scaloni’s team-building, it did.

It’s ironic, perhaps, that Messi’s big day on the international stage finally came when his own performance was the most low-key of all: a missed late chance aside he was infrequently involved, with defensive aptitude the order of the occasion more than flair or outright attacking genius.

Messi won top scorer and best player of the tournament, but he has won those before. He has been the best player by a mile before, and not won. He had big contracts, impervious security in his position at club level and knowledge of the future with Barcelona, but not won with Argentina.

Now he has nothing domestically – is a free agent right now for all intents and purposes – yet has, with his team-mates, delivered on the international stage. That’s what he sought, that’s what he focused on and that’s what Lionel Messi has, finally, earned. 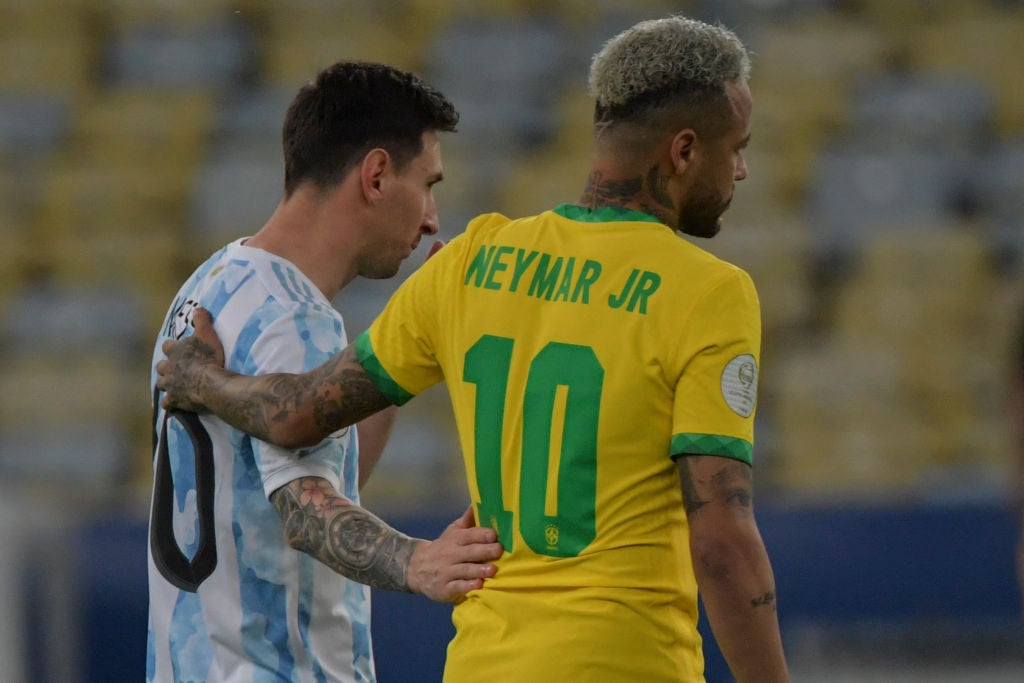 Neymar is far from running out of time, even if he’ll be into his 30s by the time the Qatar World Cup rolls around.

But with each of his greatest peers now having checked that particular box on their careers, it’s another layer of pressure which transfers to Brazil’s great hope.

He now, no longer Messi, must cope with yet more expectation, yet more ‘proof’ of him having not quite lived up to the standards set by those who started before him.