Match report and free highlights as Liverpool suffer another setback at Leicester with goals from James Maddison, Jamie Vardy and Harvey Barnes inflicting a fifth defeat in their last seven games; Mohamed Salah had earlier put visitors in front

Leicester scored three goals in seven breathtaking second-half minutes as another Alisson mistake contributed to a 3-1 defeat for Liverpool at the King Power Stadium.

The Premier League champions looked in relative control and deservedly led when Mohamed Salah broke the deadlock after 67 minutes, but Jurgen Klopp’s side imploded to slip six points behind their opponents.

James Maddison hauled Leicester level when his free-kick was allowed to stand following a VAR review for an offside call on Daniel Amartey (78) before a terrible breakdown in communication between Alisson and new boy Ozan Kabak allowed Jamie Vardy to tap home from close range (81).

Harvey Barnes compounded Liverpool’s misery with a well-taken third (85) as Leicester moved up to second in the table ahead of the weekend’s remaining fixtures, with the visitors still fourth – 10 points behind leaders Manchester City having played two games more.

Man of the match: Harvey Barnes.

Liverpool, who lost James Milner to an early injury, dominated possession in the opening period with Salah mainly involved but there was no end product.

The Egyptian was unable to get the ball out of his feet after Jordan Henderson’s fine pass put him through on goal, another left-foot shot failed to trouble Kasper Schmeichel and the Dane was smartly out to smother at his feet on another occasion. 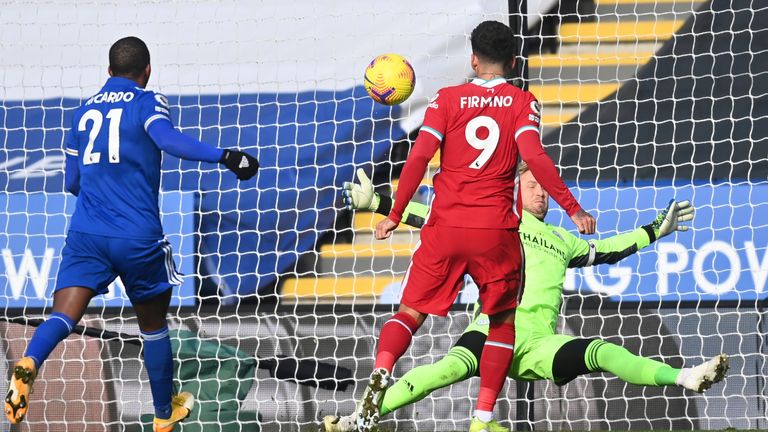 Schmeichel also produced a stunning save to deny Roberto Firmino from point-blank range, but the goal would not have counted with replays showing that Henderson was offside in the build-up.

Leicester were subdued for much of the first half but were denied the opener after Vardy’s flurry of activity inside the final few minutes.

The returning striker had already headed straight at Alisson from a Barnes cross when he was released by Maddison’s cute flick, but, as Henderson did his best to put the striker off his shot, the ball clipped Alisson’s crossbar.

It would have been a marginal offside call for VAR Stuart Attwell, but Vardy was played onside moments later only for Alisson to save with his feet. 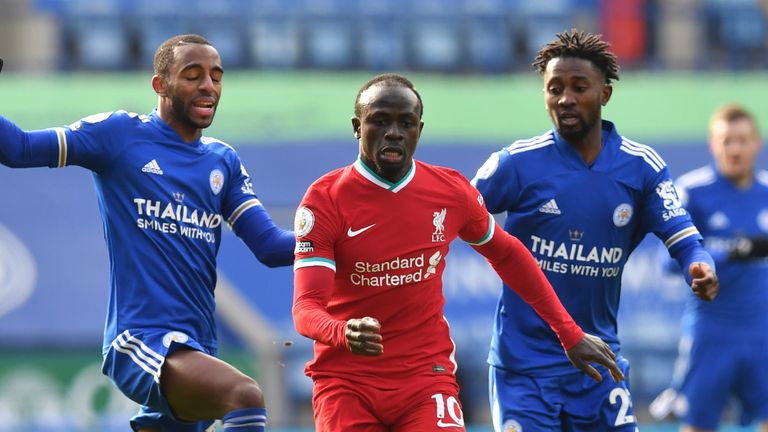 Liverpool entered the second half having scored just once in the first half in their last eight league games but they continued to impose themselves with Trent Alexander-Arnold’s 25-yard free-kick deflecting onto the woodwork.

Brendan Rodgers called upon Daniel Amartey to replace the stricken James Justin. Hamza Choudhury dropped to the bench along with Ayoze Perez and Kelechi Iheanacho as Jamie Vardy, Marc Albrighton and Wilfred Ndidi all started.

There was a debut in defence for Ozan Kabak as he replaced the injured Fabinho. Thiago dropped to the bench as he was replaced in midfield by James Milner in the one other change to the side that were thrashed 4-1 by Manchester City last weekend.

Firmino then flashed a header wide but Liverpool eventually found the breakthrough on 67 minutes. Alexander-Arnold’s shot was initially blocked by Caglar Soyuncu but the full-back was fastest to the loose ball to set up Firmino.

The Brazilian swivelled away from Amartey and Jonny Evans to flick the ball into Salah’s path, and the forward calmly passed the ball into the corner for his 17th league goal of the season. Then, it all fell apart for the visitors. Roy Keane described them as “bad champions” following the 4-1 dismantling at the hands of Manchester City and it all unravelled in the final 15 minutes.

Thiago Alcantara had been very close to conceding a penalty when he brought down Barnes on the edge of the box, but Maddison exacted swift punishment with his free-kick from the angle finding the bottom corner. There was a brief delay as VAR Attwell checked for an offside against Amartey but replays showed he was played on by Firmino.

Within seven minutes, the hosts were 3-1 ahead in clinical fashion. Firstly, Youri Tielemans’ searching pass for Barnes caused a calamitous mix-up between the onrushing Alisson and debutant Kabak as the rookie defender’s attempts to intercept effectively took his goalkeeper out of the game, allowing Vardy to run in and gleefully accept the gift.

Klopp cursed Alisson’s latest blunder but he was still gathering himself when Leicester doubled their lead as Wilfred Ndidi unleashed Barnes behind Liverpool’s dishevelled backline with his shot finding the bottom corner.

Liverpool cling on to fourth spot for now but, 30 points worse off than they were at this stage last season, a game that tipped on its axis only underlined just how far the mighty have fallen. 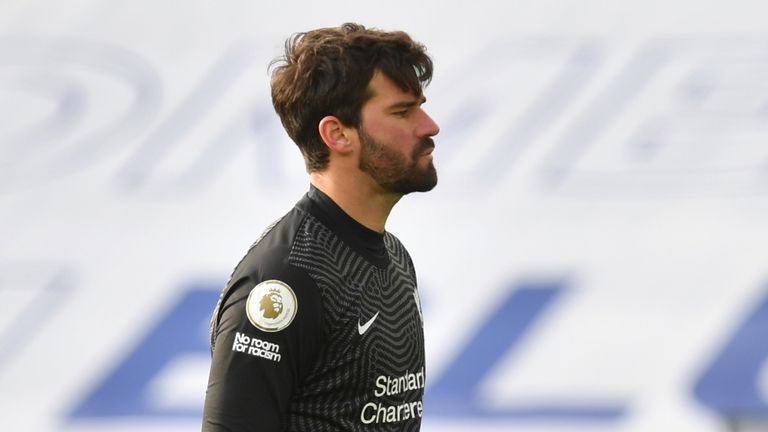 Leicester boss Brendan Rodgers told BT Sport: “Very proud of the team. I think a year ago if we’d gone behind in the game, we’d have been disappointed and not got something from it. I thought in the second half we were much better in our defensive aggression, and that allows us to attack the game with more aggression. The players adapted really well.

“When the game broke down for them, we had the space to exploit, and I think the players managed it well. Harvey was incredible with his composure and finish. Defensively very, very good, we had to work, fight, run and then we had quality to get the goals.

“[Top four and beyond?] There’s still a long way to go, it’s probably not what you want to hear. There’s 14 games, but we’re certainly not getting carried away with anything. You have to have humility at the top level against such top teams. Today was a great result for us, a great performance against the champions.” 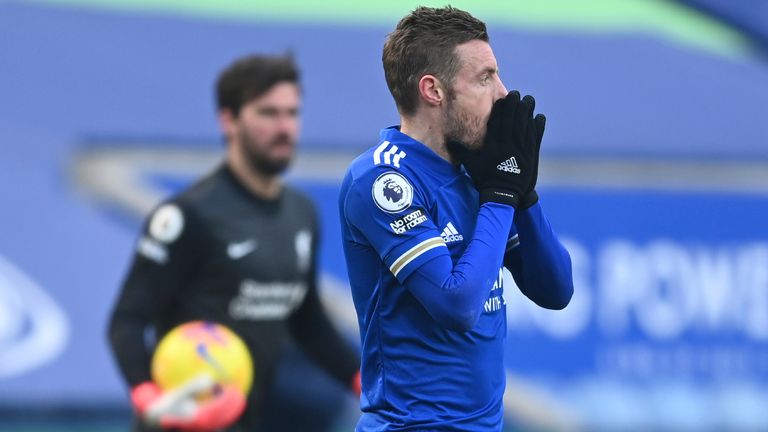 Liverpool boss Jurgen Klopp told BT Sport: “It’s tough times. The only thing we can do… you saw we tried everything. It’s not that we didn’t try and want. We were confident again, Ali was confident, he played a super game, made a super save. So that’s all fine. But in that moment maybe because of last week, who knows, he comes out.

“I didn’t hear him shout, to be honest. I’m not sure if he said something or not. Ozan doesn’t know in that moment, doesn’t know him long enough, is he coming or not coming and that’s how it leads to the second goal.

“But the turning point was the first goal. That’s not ok that that was the turning point but in our situation it was completely unlikely. But that’s the point we take, as criticism for ourselves: that it changed too much with this one goal, even when the goal was really tricky, penalty or no penalty. I think it wasn’t even a foul because Barnes jumps in the situation.

“We didn’t react well on that, I take that. But around that we really played top football in the end against a really strong side. They were lucky to win today, they probably know it in the end. They finished the game, that’s fine, they deserved the three points but we have to deal with our own situation.”

Man of the match – Harvey Barnes 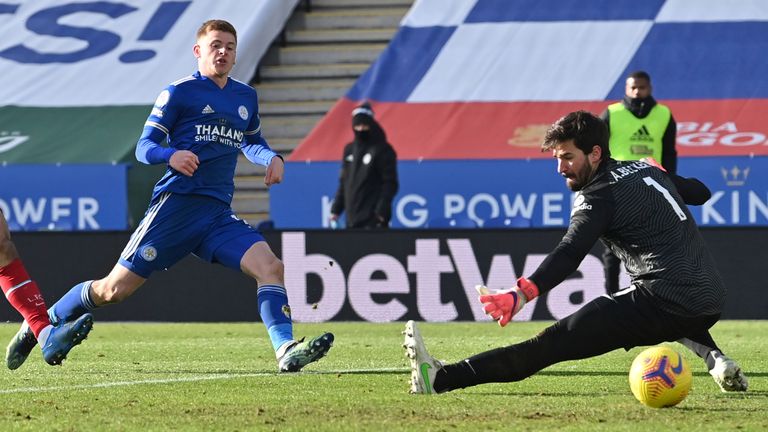 Rodgers spoke of his team needing to “fight and run” following what could prove a significant result in the race for a top-four finish and this was embodied by Barnes.

With James Justin set to be out for the remainder of the season, the midfielder impressed in doubling up with Ricardo Pereira to limit Liverpool’s threat down the right but he truly came to life in the final 15 minutes.

Barnes produced two key passes to go with his composure to score a decisive third for his team, finding the bottom corner with supreme confidence having breached Liverpool’s wide-open defence.

The 23-year-old has scored more Premier League goals than any other English midfielder this season, with his strike today his eighth of the season.

On Barnes, Rodgers said: “I thought he was absolutely brilliant. The guys need huge credit as our plan was to go to the diamond with Harvey up front with Vards if they were chasing the game.

“It gives you that attacking thrust when you have the ball and so we could break through into the space. Barnesy finished his goal so well and that’s been the biggest development in his game. He looks like he can score in every game he plays.”

Leicester return to Europa League action on Thursday as they travel to face Slavia Prague; kick-off 5.55pm. The Foxes then visit Aston Villa in the Premier League next Sunday, live on Sky Sports; kick-off at 2pm.

Liverpool visit RB Leipzig in the Champions League last 16 first leg on Tuesday at 8pm before returning to Premier League action at home to Everton on Saturday, live on Sky Sports. Coverage starts at 5pm with kick-off at 5.30pm.