‘Virgil van Dijk plays with pain but could not carry on… Thiago had a proper knock that does not look good’: Jurgen Klopp fears major double injury blow for Liverpool after horror tackles in Merseyside derby

Jurgen Klopp fears a huge double injury blow for Liverpool after Thiago and Virgil van Dijk’s were on the wrong end of two horror tackles in the Merseyside derby.

In the first half, van Dijk was unable to play on after Everton goalkeeper Jordan Pickford smashed into him after it was judged the Holland international was slightly offside whilst attacking a cross.

Pickford managed to get away without a card from the challenge that ended van Dijk’s match as Joe Gomez was subbed on for the Reds defender. 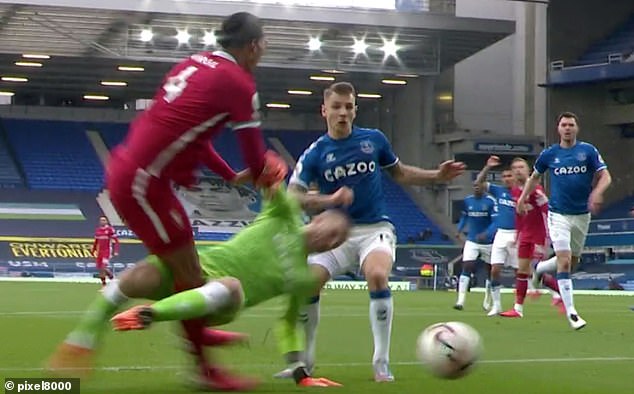 After the match, the Liverpool manager said that van Dijk can normally play through pain but this injury was too bad and does not look good for him.

He said: ‘It’s not good. Virgil plays with pain but he couldn’t play on. Not good.’

In the final moments of the dramatic derby clash, Liverpool were denied a winner from a controversial offside decision after a VAR review.

Klopp was clearly bemused at both Pickford’s fortune to get away with the tackle on van Dijk and the VAR decision that cost them two points.

He added: ‘Pickford kicks him completely. I need to watch it back. I’ve seen the disallowed goal at the end and in the picture I saw it wasn’t offside. Can someone explain that to me?’ 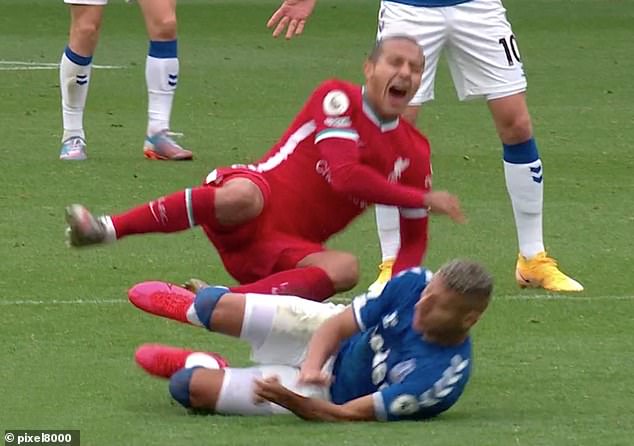 The Premier League champions are facing a potential huge double injury blow after midfielder Thiago Alcantara was on the wrong end of a horror tackle from Richarlison that saw the Everton forward sent off.

The Reds boss revealed that the Spaniard needed treatment after the incident and is also not in good shape ahead of the upcoming congested fixture list.

‘The red card from Richarlison, it’s not only a red card for Everton it’s a massive foul on Thiago as well,’ Klopp said to BT Sport.

‘Thiago has a proper knock there, he has ice now, we don’t know what he has, it looks not good, to be honest.’